Eric Lampaert studied at École Internationale de Théâtre Jacques Lecoq in France and Middlesex University in the UK. So naturally he became a stand up comedian. Martin Walker asks what to expect from his intriguingly titled 2014 Edinburgh Fringe show.

“My show is called Testiculating – Waving Your Arms Talking Bollocks, which basically explains what to expect from the show; etymology, sex and nonsense.

“I did free festival last year in The Ballroom at The Counting House and loved it. It’s a big room with space for chaos. Free Festival audiences are delightful, but you never know who’ll walk in and whether they’ll arrive on time. Hence chaos. Which is ideal for my hurricane-style of comedy. I like wrenches thrown in my material as it makes every show unique.

“Also, Edinburgh’s become too corporate. Get PR. Get this! Get that! If you want to be successful… I think bollocks to that! Just do what you’re good at and hope you find your audience in the festival melange.”

“A neurotic idiot with an intelligent and unfiltered brain. I don’t know. I like Eddie Izzard and got to support him – which nobody else does! Ha! That was an awesome moment in my career. Telling folk that usually gives them an idea of what to expect.”

“When you turn 21, your appendix will burst but the ambulance service will tell it’s nothing to worry about. Don’t believe them. You nearly die, can’t eat for two months and leave addicted to morphine weighing seven stone…”

“I’d need my neuroscientist best friend with me who anchors me from telling the wrong things. We do a podcast together and I need him there! Other than that, everyone’s interesting so I wouldn’t care who comes. Jesus would be a good one. Amou Haji, the guy who hasn’t washed for 60 years. See if Jesus will wash him? I don’t know. My seventeen year olf self, but not tell him what’s happening to see him freak out! Ha! Virgin! – Pre-April seventeen year old that is…” 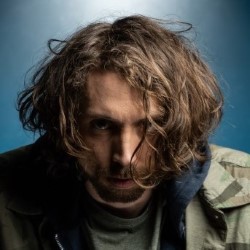