Tell me about the 2022 production of Cirque Berserk!

Cirque Berserk! has been touring nationally and internationally since 2014, including four seasons in London’s West End, and this is our third visit to the Edinburgh Festival Fringe. I’m told that we are the best-selling Fringe show of all time, which I’m delighted to say is to a large extent is because of the huge support we get from local audiences in Edinburgh. We describe the show as REAL circus made for theatre, because it uniquely combines all the thrills and skills of traditional big top shows with contemporary “cirque” – style theatricality.  We have aerialists, acrobats and daredevil stuntmen  from countries across the globe – including Brazil, Argentina Cuba, Spain, Tanzania, Kenya, the Czech Republic, Mongolia, Ireland and Ukraine. Cirque Berserk! is designed to entertain audiences of all ages and backgrounds, with plenty of comedy between the thrills, and characters which audiences can really relate to. The show and its stories develop every year as we introduce new acts and characters, but we  make sure that there are always familiar faces in the company….the amazing Timbuktu Tumblers acrobatic troupe and the brilliantly talented 3.5 foot tall Brazilian comedian and aerialist Paulo dos Santos are firm favourites with our Edinburgh audiences.

How did you get involved with the production, Martin?

I founded Zippos Circus almost forty years ago, and it is now the UK’s longest-running big top show, continuously touring the length and breadth of the country in its colourful tent. Although tenting circus remains hugely popular with audiences, offering the full “immersive” circus experience, there is an increasing trend towards circus shows being presented in theatres. I was keen to get involved with this genre of work as well, so I teamed up with my old friend Julius Green, who is a theatre producer and director. Using the artists from Zippos, we created an all-new stage show, which is directed by Julius and choreographed and designed by a team with an entirely theatrical background. This unique collaboration between a West End creative team and an established ensemble of “traditional” circus artists, who live in caravans and are used to performing in a sawdust ring in the big top, is what has made Cirque Berserk! the UK’s leading theatre-circus show. Its fascinating to see how the performers are able to adapt their extraordinary skills to a theatrical setting, and the result is genuinely edge-of-your seat stuff. You won’t see five motorbikes in the “Globe of Death” on stage anywhere else in the UK!

Where did the name ‘Zippo’ come from?

I trained with mime artist Jonathan Kay. David Bowie was one of his more talented students at the time, but I was a truly hopeless mime! However, Jonathan Kay gave me the opportunity to experiment as a talking clown, busking on Brighton beach with Attic Theatre for many summers during the early 1970s. Then veteran acrobat Johnny Hutch took me under his wing and trained me as an acrobatic comic. Zippo was the name I adopted for the clown character which I created. For some reason he had an Italian accent, and the act involved some very dangerous escapology with a lot of fire. Zippo seemed like a good name for an Italian-accented clown who was always setting fire to things! I accidentally set fire to myself once and ended up in hospital for a year, but that’s another story…..

What is the future for Cirque Berserk!?

Apart from during actual lockdowns, we continued working throughout the pandemic with the support of the Cultural Recovery Fund. This was the first time that traditional circus had benefited from government support, and it enabled us to keep our brand strong, including seasons in the West End and at Hyde Park Winter Wonderland. It was a very difficult time for the performing arts, but we worked hard to bring live entertainment to audiences and they were always delighted to see us. Now the future looks bright for Cirque Berserk! as we head into our ninth year. As well as touring throughout the UK, we will be continuing with our regular West End seasons. We have also toured to a number of European countries and are planning to expand our work overseas. The Edinburgh Festival Fringe is a fantastic international showcase for companies like ours, and we always pick up plenty of overseas bookings.

What is the future for circus generally in the UK?

There are more circuses today in Britain than there ever have been and more people interested in circus than ever before. I founded a circus school twenty-five years ago. At that time there was one other circus school in Britain. There are now five or six in London alone. There are two circus schools in every major city, and one in every town. This is a good thing. It does for circus what children’s ballet classes do for ballet. Although many who try it never become great artists themselves, they start to appreciate the skill, understand the language and develop a lifelong interest in circus. The Greatest Showman film, although historically very inaccurate, has also done much to popularise the artform. Circus has always been the most diverse and accessible of the performing arts, and for that reason it will continue to grow its audiences and go from strength to strength. 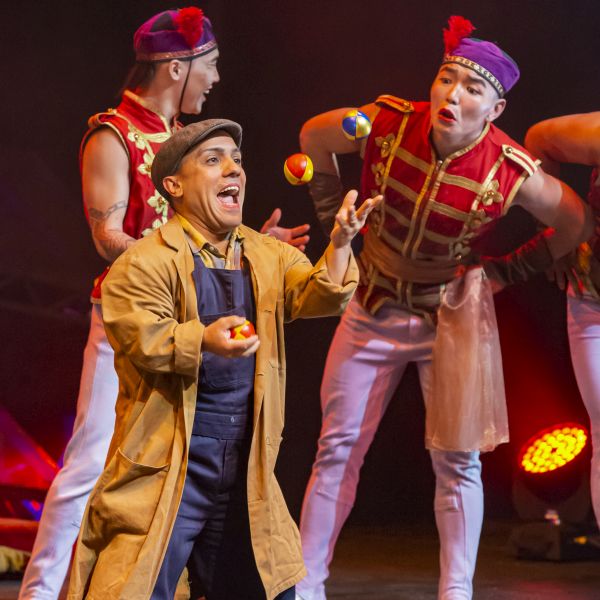