Martin Walker grew up watching Christopher Biggins on the popular 80’s kids TV series, Rentaghost. The comic actor also appeared in The Rocky Horror Picture Show and had recurring parts in some of the best known classic sitcoms, Porridge, Whatever Happened to the Likely Lads? and Some Mothers Do ‘Ave ‘Em .

What’s the secret to a good sitcom and are there any current shows that you enjoy?

“At the moment I love Rev. Brilliantly acted, with a wonderful script.

“In any good sitcom writing is of the essence. If you have brilliant writers, you are eighty percent there. And a star, or perhaps a couple of stars, who work together.”

And a strong supporting cast?

“Well, that goes without saying!”

You also appeared in several kids programmes, including my own favourite, Rentaghost.

“I was asked to get involved with Rentaghost when a new producer, Jeremy Swan, came in and they had a bit of a revamp. I played Adam Painting, a local entrepreneur. The show lasted nine years. It was one of the great, great experiences of my life because it was such fun. We all got on so well and it was a terrific show.”

You appeared in the cult film, The Rocky Horror Picture Show.

“I went to the very first night of Rocky Horror on stage at the Royal Court and I was blown away by it. I knew a lot of the people involved so got to know the show well. When they did the film, they wanted to cast sixteen Transylvanians and they came to me to play one of them. It was a great honour. We got paid £100 a week for ten weeks and we were stoned every day!

“It was a bit of a flop at first in the UK, but the Americans took to it and made it into the cult film that it would become.

“I’ve gone on to play the narrator in the stage show. The fans get very excited because I was involved in the film.”

You seem to have played these iconic roles throughout your career.

“I’ve been very, very lucky. From playing Lukewarm in Porridge, Nero in I Claudius and a sex crazed vicar in Poldark, I’ve done it all.”

You also became Queen of the Jungle in ITV1’s the I’m a Celebrity… and you won the Channel 4 show, Come Dine With Me. What’s your secret?

“No big secret… be yourself. And enjoy life.”

You are one of the UK’s best known pantomime actors and have played many a dame.

“Panto is just amazing live entertainment – where I’m alllowed to communicate directly with the audience and have fun. It works on many levels and there’s something in it for everybody. I’ve had very young children watching, whilst they feed off their mothers breasts sometimes!”

The adults and the kids laugh at slightly different things…

“Yes, absolutely. But as long as it’s not crude – I’d never be involved in a crude pantomime.”

Are you in Panto this year?

“Yes, I’m going to be in Southend which is great because apart from anything, it’s where I live. I’m doing Peter Pan with The Hoff – the legend that is David Hasselhoff. We’ve already sold ten thousand tickets – we’re going to have a huge season there.”

“Jack Whitehall, Sarah Milligan and if I can bring him back from the dead, Tommy Cooper.” 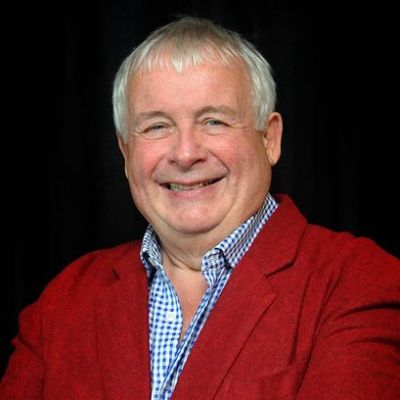