The fast and funny globe-trotting impressionist, Anil Desai, returns to the Edinburgh Festival Fringe with more comedy action, laughable adventures and romance in this mix of stand-up and stories featuring over fifty movie star impressions.

“It’s my celebration of movies and their impact on life, and features an all star cast of ‘impersonated’ movie stars! Though it’s more like a ‘Best of’ show – featuring some of my and my audience’s favourite impressions and stories – but also has about 20 minutes of new stuff for the hardcore fans!”

“I performed with them last Edfringe, and had a really brilliant time. They offered me the time slot and venue I wanted and it’s the least stressful lead up to the fringe I’ve ever had, mainly because they make all of the admin side as easy as possible, even my cat Bernie could do it, if he wasn’t spending all his time playing the jazz flute!”

How long have you been performing impressions? Do you remember your first gig as an impressionist and who you impersonated?

“I’ve been doing impressions since I was in school. I first did ‘Eddie Murphy’s Delirious’ concert in the school dinner hall at 13 to the shock of all my teachers. They called my dad and told him I was swearing in school to entertain the other kids, and my dad said ‘oh, is he doing his Eddie Murphy bit? I love when he does that’ – my dad was then sent to the headmaster’s office for ‘encouraging’ me – but now I make a living out of it, so win for Dad!”

You’ve toured all over the world. Any anecdotes of being on the road?

“I arrived at Sydney airport in Australia and on my exit, I saw a chauffeur holding a sign with my name ‘Mr. A Desai’ on it, I thought ‘how cool is that?’, and said “that’s me!!” excitedly. The chauffeur took my bags and lead me to the car, he opened the door for me – that’s what I’m talkin’ ‘bout Jay-Z!

“He got in, and began to drive. I told him that my managers had pulled out the stops and made a very nice surprise for me by booking the limo service. He laughed and said ‘yes, they are good people… Would you like to take the scenic route?’ he generously asked, ‘Sure, why not?’ I eagerly replied…. After about an hour of wonderful sight-seeing around Sydney by night, he dropped me off at a very fancy, swish 5 star hotel in the city. International star treatment I thought! ‘thanks mate, I’ve got it from here’ I say to him, slipping my only $20 note into his hand. He smiles, thanks me and leaves. I stroll inside the through the huge marble lobby, and wait at the check in desk… I hand over my passport to confirm my ID, for the room booking, which I believe my managers had organised in advance.

“Well, after much deliberation and phone calling by the hotel staff, it turns out that none of this was for me! There was another Mr A Desai, a computer-science consultant from the USA, who had been waiting for a driver to collect him at the airport, but ended up having to get a taxi all by himself to the hotel, and managed to check in an hour before I arrived – thanks to the scenic route!… So, my managers hadn’t booked me into this hotel, or any hotel, I later found out that they had forgotten I was coming in that night, and the driver was not for me either… none of it was for me… I just thought it was because I saw an official man holding my name, I’d never had my name held up by a chauffeur on exiting the airport customs, it’s what we always want after 24 hours of travel!…

“I ended up apologising, you know, mistaken signs, etc… and ended up having to drag my suitcase 7 blocks up the street to a cheap windowless motel, I didn’t know they existed!… I didn’t have any more cash on me for a taxi, instant karma hit!!… the excitement of dreaming about your name in lights, the hopefulness of success and all it brings, shattered in an instant, I was hoodwinked by jetlag! And here’s the kicker, on my opening night Mr A Desai was sat in the front row of the show… and that’s what I opened with!”

“Steve Hughes, Phil Nichol, Glenn Wool, Paco Erhard, Anna Morris, Bec Hill, Dan Schreiber, Tony Woods, Tom Stade… so so many, but mostly people that don’t get seen by TV audiences as much as they deserve to. And these guys deserve to!!” 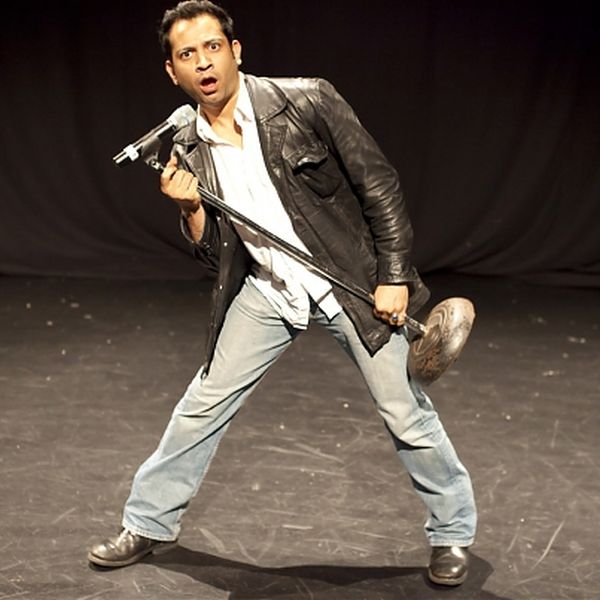