It’s gonna be four grown men playing songs that for the most part deal with existential themes of life and death, loneliness, love, revolution and drunkenness, with at least one of the men wearing a pair of furry legs, unless the other members of the band manage to convince him otherwise, (See below).

What is the history of THE iDiOT CIRCUS?

Nick was on tour with the RSC in America, when a few of the actors got drunk, bought ukuleles, sat in a hotel room making up stupid songs. The other actors sobered up and moved on in the morning. Nick didn’t.

Not too long after, Nick forced his old school friend Matt to pick up the bass, after a 15 years sabbatical, and met a kindred iDiOT in James through what actors do when they’re not acting: catering events.

Josh is a session player joining us for the festival, who happens to be awesome and is really the only musician in the band.

The Edwardian and Victorian eras provide a common backdrop for richly macabre stories. Why is that? What fascinates you about the period?

We’d guess because it’s so unfamiliar? Unfamiliarity makes things unspecific and generalised, but also exotic and strange, so it’s interesting but removed. You’d hope someone wouldn’t pull out a ukulele and start singing about, say Fred West, that would be horrendously awful and crass.

Nick writes songs that tell little stories about depression or alcoholism or something, that refracted through a lost imagined era, are less bogged down with our current culture  (which can date things) and hopefully make the songs universal and intriguing… (we said hopefully).

Yes. The iDiOT CIRCUS can be pretentious.

Do you have a favourite hat?

Matt has taken to favour wearing horns recently, and within the band likes to be referred to as ‘Goat Man’. He’s also taken to wearing a pair of furry legs, which we realise wasn’t part of your question, but we add here for context.

James doesn’t wear a hat because he has a beautiful head of blond hair and we need all the selling points we can get.

Are you excited to play Edinburgh Festival, for the first time?

Yes, we fucking are. 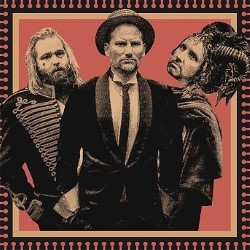