Colin has written a show featuring the story of how and why he created a Digital Legacy. In 2014, while on a date that was going badly, he started planning for his death. We wanted to know more…

What do you want to happen to your Facebook and Twitter accounts after you die? That’s what I was left wondering while on a first date that was going so badly I started planning for my death and afterlife, both on and offline.

It’s the closest I’ll get to ever going on an adventure holiday except I’ll be more likely to die and less likely to have adequate insurance cover.

People who tell me I’m not funny, because they make me try harder.

The first two words were “Oh dear” and they said I had “commitment issues”. Can’t think of what my worst review is.

Part of a wrestling team called “The Burns Unit”, I’d have side burns and my tag team partner would be a Robert Burns fan.

Is it true you’re in talks to star in a remake of the TV series Manimal?

My Brave and innovative idea would be a show hosted by a different celebrity each week, unscripted and unrehearsed so it would be amazing. The first episode would be fronted by Scarlett Moffat, so it couldn’t fail and who’s bigger than Duncan from Blue and Steps right now? …exactly, nobody! So we’ll have them in a sketch too. Get people like Jack Whitehall in for future episodes which are definitely going to happen. Title: The Greatest Show On Earth. 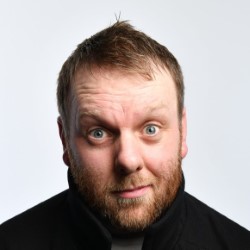