Sally O’Leary and Rhiannon Neads are the comedy pairing, Stiff and Kitsch.

Hi Rhiannon, tell me about your new show, Adele Is Younger Than Us.

We take you through our disastrous love lives to date in an attempt to write a passionate love ballad like the ones Adele writes. Spoiler: We’re not entirely successful.

Lack of sleep, chips and failing to hail a cab in the middle of the night and having to walk two miles back to your accommodation in driving rain.

I’m constantly inspired by my mum. (eww, sentimental) But seriously, she is the best flyerer I know, can befriend any stranger at a party, and is at the age of 57 considering getting her first tattoo.

I once discovered I had food poisoning in the middle of a fringe production of ‘A Christmas Carol’. Needless to say, it was an unpleasant addition to the twelve days of Christmas.

Stiff and Kitsch have had some rave reviews, including ‘the girls seemed comfortable’ ‘they sang songs’ and ‘English Actress and Cork Woman’. The title for our new show has been directly lifted from a review which deemed us ‘by all accounts two normal girls’.

Probably an astronaut. I do have a fear of flying though so I can’t help but feel that might have been an impediment.

Naked by David Sedaris. The man is a comic genius.

How many musical comedians does it take to change a lighbulb?

I’m not sure but mine is currently broken and has been for the last three months. 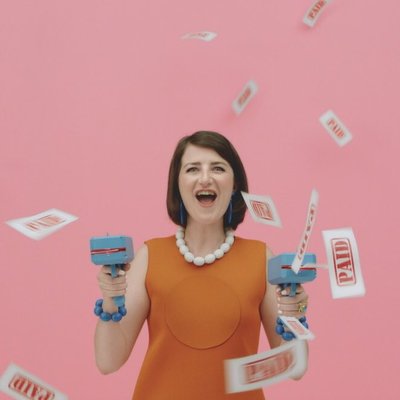