KMT is described as an hour of comedy on things that Athena Kugblenu has experienced and observed. Issues like politics, race, class, sexism…We fired off a Q&A to find out more.

Hi Athena, tell me about KMT. What is it?

It’s about things I’ve observed that make me KMT, that will probably others think “KMT” so we can all say “KMT” together. It’s hilarious. And I explain what KMT means too.

talk about world events and use my personal experiences to explore the idea that we are all wrong about something. I guess I am trying to argue the best way forward is to laugh at our own inadequacies before we shriek at other people for theirs.

Firstly, it’s a brilliant city. Scenic, historic but still really interesting and contemporary. I think the Fringe is such an important arts festival, incredibly international, really accessible because of the free fringe and wonderfully diverse. It’s an opportunity to watch other creatives thrive.

Issa Rae is an inspiration, she created a You Tube series that is now a HBO show. I admire her vision and talent as a writer, director and actor.

I once performed to silence for 45 minutes. Hands down my worse experience on stage. Afterwards I ate chips with ketchup AND mayonnaise.

Someone once started a review with “Athena is funny, and she knows it”. I hadn’t realised I was confident before I read that. It made me realise the value of performance because I can assure you that is not how I feel!

A project manager or an academic

The Book of Night Women by Marlon James. I cannot recommend it enough.

It would be comedy panel show with a quota of one man per episode (preferably Anthony Joshua). I think it would be about Brexit. It could be called Brexitwatch and we would cover all the progress made that week. We could really mine the Single European Act for all the comedy gold hidden within its passages. They’d have to commission loads of series… by the time we leave the EU, my salary would probably be worth publishing. 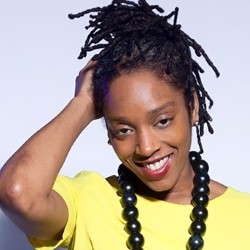