Now that Freddie Farrell is a family man, he’s trying his best to be responsible. Unfortunately life has other plans. But with the likes of Joe Lycett and Dan Nightingale as fans his future in stand up comedy looks bright. He talks to Martin Walker via email about his Edinburgh show, Lock Stock and One Joking Farrell.

“It is my first solo show although not my first hour; it is going to last maybe thirty five or forty minutes. I will be doing gigs that length for a few years before bringing my first hour. It is just me talking about life and such, I don’t write to a theme and nor do I ever want to – to be honest, that’s not for me. It is just me talking about how my life has changed with fatherhood, gunfights and otters.”

“I done a two hander show last year with another act and we went with Laughing Horse and it was all pretty straight forward and sweet, no palavers, good equipment, great venues and they are very supportive, and they don’t just do the Edinburgh Fringe, they go all over the world! I don’t think Alex Petty sleeps.”

“I always loved comedy and stand-up especially, I went to a gig and all 4 comics died on their arses and I remember thinking ‘I can die on my arse as good as them’ so thought I’d give it a shot, I always wanted to just never had the bottle. Three of those comics still gig now and I have gigged with them numerous times and never told them their death inspired me. I will one day.”

“Best experiences are probably doing weekend gigs with circuit legends you idolise and wanted to be like, now suddenly you’re on the same bills as them.

“Probably not worst experience but certainly my favourite horrific story. 300 people in, 9 hen parties, 7 stag parties, that’s 16 separate parties in one gig! Obviously they put the 25 man stag do on the front tables, they were constantly talking, I asked them to quiet down and they threw a chicken wing at me.”

“Dan Nightingale would be MC, opening I would have Louis CK, because it’s my show I make the rules yeah? So I would put myself in the middle and Bill Burr closing. Wouldn’t be allowed to be broadcast on BBC1 though.” 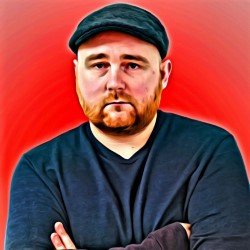