Sometimes if feels like it’s only comedians who successfully bring the discussion of politics, religion, and society, to the masses. Are stand ups the modern philosophers?

As Marx said, “The philosophers have hitherto only interpreted the world in various ways. The point, however, is to waggle your eyebrows and poke fun at it.”

Comedians do enjoy a bit of license, still, I hope, to discuss things that many more precarious professions shy away from. They can share their beliefs a bit more honestly than you might see on Newsnight. They can identify and ridicule especially the gap between the theory and the practise.

I think any comedian’s philosophy will emerge naturally in their comedy, if they pursue it with their authentic voice. And if they don’t, well, I guess that’s a philosophy too in a way, though a somewhat dispiriting one.

In this show I hope to take aim among other things at some of the pretensions and delusions of philosophers, their individual failings, and the haplessness of the trade, as a rule. This is not an original idea. Monty Python’s Philosophers’ football match is one of their funniest sketches, imho, as of course is the Australian philosophy song too. In fact, they did it so well that they scared away the next three generations of comedians and I’m just hoping the dust has settled enough now, memories are short and I can safely return to pick over the carcass.

But I will also be scrutinising the inadequacies of my own reading, and failure to put my stated philosophy into action.

Is there a culture war? And if so, who is winning?

I remember banging on about the Culture War being waged by the Left a couple of years ago, and getting a somewhat intemperate thread on twitter from the Welsh Hobsbawm himself, @twlldun, about how it had originally been the creation of Pat Buchanan, in a speech he made in 1992, and had originally been the manifesto for what was to become The Tea Party –  so you could hardly complain if the Wolverhampton Student Union were pushing back a bit now. Fair enough.

Truth is I think there is always a culture war simmering in any advanced nation and quite right too. Once culture begins to fragment, whether through immigration or just the natural skepticism about tradition that followed the Enlightenment, public debate should not just be about fiscal policies and defence – both of which have cultural implications anyway.

In America, it’s a deeper divide because they do still have a powerfully conservative Christian Right – albeit weakening – and various, well-funded and highly articulate secular and, eg Reform Jewish voices speaking from the Left.  Our traditions are somewhat more of the pragmatic, common law variety. Our Labour Party is more rooted in Methodism than the Frankfurt School. Many of our Tories are neo-liberal, yes, but socially paternalistic rather than moralistic. I think that is why we are finding the present overheated discussions uncomfortable.

But for as long as I can remember there has been a fear that scientific advances were moving faster than our shared morality could keep up with. Fifty years ago, it was test tube babies. Now it is “gender re-assignment” surgery. There is no escaping these conversations, they need to be had and they need to be had with clarity and honesty. Weak communications lead, to paraphrase David Shrigley, to bad situations.

What’s more important on stage – the greater truth or a better punchline?

There is no conflict between these two aims. One is the material, the other is in the style, the cut. And often, the aims of the punchline – the spontaneous eruption of laughter, as you get in under the audience’s radar and detonate behind their defences –  is best served by being a simple, even abrupt statement of the truth. Punchlines rarely work by being evasive or hedging. The less appreciated skill is in creating the set up that gets the nail in position for the perfect strike.

What do you think of the current state of comedy?

It is a fact of being in one’s mid-fifties I think, that the temptation to be nostalgic about one’s craft and profession has to be constantly resisted. It would be so easy to slide back into the “golden era” thinking, and to dwell on the stand up that I was lucky enough to start out in – the mid-nineties, when people like Sean Lock, Bill Bailey, Eddie Izzard, Jenny Éclair and Dylan Moran could easily be seen on a Thursday night at The Comedy Store, and the Perrier award announced the annual arrival of a genuinely memorable new talent on the touring circuit. I think live comedy is waiting for its next paradigm shift, its next rebirth, and the Edinburgh Fringe has always had a role to play in that.

But I also think that people like Bo Burnham are making “content” – much as I despise that word – that is vastly more complex, sophisticated, and still funny, than anything comedians even twenty years ago were capable of doing “on-line”. As always, new media excite talent with its possibilities. It then gets frenetically mined for fifteen, twenty years and then things cool off. Steve Martin’s career is the perfect microcosm of this and his book “Born Standing Up” perhaps the most insightful written on the subject. Martin has triumphed in live stand up, funny and moving movies, brilliant comic prose, a few great months on twitter, but still returns always to first love – Banjo! My hero. 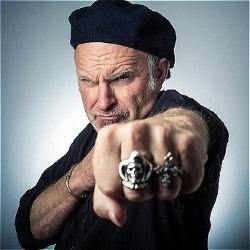