The multitalented Emily-Anne Lyons, or Elf to her friends and fans, is a comedian, writer and director. She created The Secret Comedians and is the co-director of OddFlock. At this year’s Edinburgh Festival fringe she presents her first solo show.

“Underground Success is my first full length stand up show, exploring all my favourite things in the world – from rap music, Game of Thrones, erotica, dancing – to the London Underground. It’s not as niche as it sounds. It’s a very happy show and the aim is to make everyone walk away feeling like a badass and a London Underground expert.”

“PBH Free Fringe has a phenomenal ethos with a brilliant understanding of how to make the fringe a healthy place for all artists to work collectively alongside each other. The team behind PBH work very hard and it’s so admirable the work they do to make the fringe more open and accessible to all.”

“As a performer, I’m very much a metaphorical cross between the fiery confidence of Pam Grier circa ‘The L Word- Series 1 0 4’ and the linguistic abilities of Eminem in his earlier work in the late 90s with Dr Dre.

“Alongside that, it’s very ramshackle, honest, and spontaneous, and glittery.”

“When I was 19 I did stand-up naked on stage at C Venues for an event called The Naked Brunch. It wasn’t my best stand-up set, but it gave me lots of confidence and I was thrilled because if you performed you got a free buffet lunch.”

“There are too many! Every comic that has ever performed at my gig, The Secret Comedians, in London, as they are all fabulous. But if I had to pick, I would love to have Jessica Fostekew, Gabby Best, Tamar Broadbent, Lou Sanders, Luke Benson, Milo McCabe, Sooz Kempner, and Grainne Maguire on screen. They are superbly talented and I love them much.” 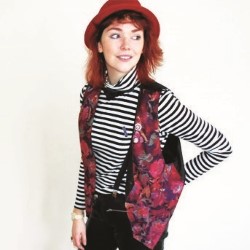