Two years ago Nathan Cassidy’s Edinburgh show Free Pound and his feature documentary film, I am Orig were nominated for a Malcolm Hardee Award. Last year he gave every member of his audience a free bet. In 2014 Martin Walker discovers that this Edinburgh adventure is to be a Date With Death.

“I have a Date of Death. I’m not ill, I’ve given myself a Date of Death in the very near future and I’ve started living as if I’m dying – living more beautifully, giving all my money away… The idea started 20 years ago, when I came close to death and lived far better. We tend to live as if we’re not dying, that’s the point. A friend of mine in the last twelve months has watched every episode of Geordie Shore including the live audience special hosted by Russell Kane, all 6 episodes of Edge of Heaven, five Dinner Dates per week and both semis plus the final of Eurovision. As if he’s not going to die. So it’s about living every day like it’s your last. And Phil Collins. It’s about Phil Collins. Phil Collins and death.”

“This is a show that even the Sinatra lawyers would love I’m sure. It’s me hosting four comedians, all on stage throughout the whole show, chipping in to each other’s sets with a backing of Rat Pack music. We’ve got I think the best room on the Free Fringe and one of the best rooms in Edinburgh, Maggie’s Chamber at the Free Sisters. Last year we had Sara Pascoe, Jarred Christmas, Mark Dolan, Patrick Monahan, David Mills, Howard Read, Benny Boot, Romesh Ranganathan and many more and this year we’ve got some huge surprise names and live music! It always works but when it really works with that free-wheeling anything goes atmosphere, it really works and creates something very special. And that’s coming from someone who hates stand-up comedy.”

Is it true that you have given money away at your shows?

“This is my final show in a trilogy of shows where I’ve given money away. In 2012 I gave a pound to everyone who came (only two people left with their pound and didn’t watch the show). Encouraged by a Malcolm Hardee Award nomination that I now never mention, in 2013 I gave everyone a £1 bet on me winning the Edinburgh Comedy Award, which I can’t remember happened or not. And this year with a Date of Death, I’m giving away everything; every person that comes gets £5, if they are alive at the end of the gig. Generosity breeds generosity, and over these years I have raised lots for my favourite charities which I absolutely do like to talk about. Last year I raised £600 for Alzheimer’s during the Edinburgh run. But no more! This is the last year I’m doing it, next year, screw the charities, I’m going to try something brand new, the audience will have to pay me. And I will keep all of it, minus the 60/40 box office split and all publicity costs and be penniless.”

“An unpublished novelist. Very close to being published. Unpublished. I’ve written two novels ‘The Cure for the Common Cold’ and ‘Believing in God’. Two big agents came in for my first novel, were fighting over it then fought so hard they both dropped out on the same day! My second novel which I thought was even better received 101 rejection letters which I considered bringing out in a book called ‘101 rejections’. If that idea had been rejected though I’d have been devastated, as well as having to rename the book. I turned my first novel into a play though that won the Sir Michael Caine Award for new writing a few years ago, so I’ve shoved those rejection letters up my arse. Which if anything was even more painful. I may just bring the novels out self-published on Amazon, which is the quintessential stamp of quality.”

“I hope to do the Rat Pack stand-up comedy show on TV in the next 80 years. My dream line-up would be a mixture of my favourite comics that haven’t been on the show yet – Glenn Wool, Bill Burr, Doug Stanhope and my favourite comics that are Rat Pack regulars – like Trevor Lock, Mr Susie, Andy Mac and Milo McCabe. It would have to be live and filmed in a club, unless the producers wanted it not live and not filmed in a club, and then we’d do that instead. We could add more pop music actually and just call it ‘Comedy Rocks’ or ‘Pop a long a Comedy’, and have Jim Davidson or Vernon Kaye hosting. I want Jim on the show in Edinburgh – I want it to be even more anarchic this year, dangerous, borderline offensive but still family friendly. 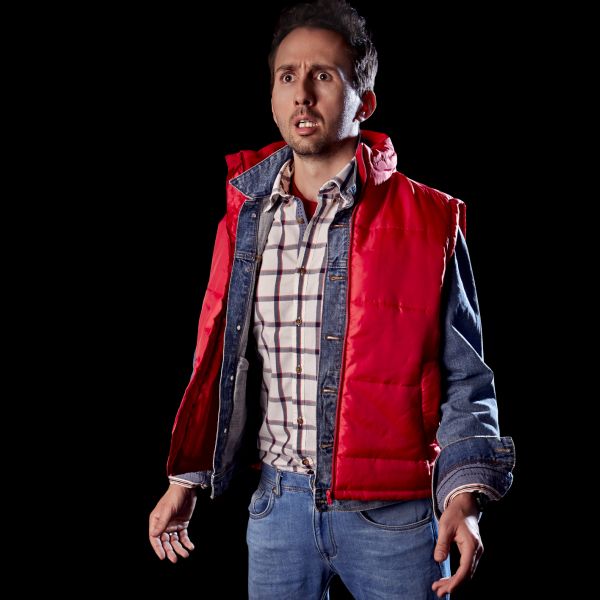