A Not So Chubby Brown is a look back at the big events over the past 5 years that lead us to this ludicrous political climate we have now… and ‘Newcastle Brown Tales’ is an hour of true life tales. Both performed by Rahul Kohli.

Hi Rahul, tells us about your two shows.

In Not So Chubby Brown I assess the events of the past 5 years or so that have lead us to the insane political situation in which we find ourselves, and just like an ATOS examination or Tory Party Conference Speech I blame you’re lazy arse for bringing all this misery and ruin our way.

Newcastle Brown Tales is an hour of true life stories to Edinburgh, centred around my drug dealing best friend Spekky Rizwan, but there’s much more than that, from nearly being killed by a fire-breathing dragon, being pissed on by a tiger, and accidentally joining a Romani Gypsy Drug Smuggling ring…

A chance to make money, and get a lot of stage time, one doesn’t find on the circuit these days, and try and write something really meaningful.

Alfie Brown, Scott Capurro, Tez Ilyas, Jamali Maddix, Chris Rock, Dave Chapelle, Kevin Bridges and Jesus, cause they’re all brave as fuck, funny as fuck and go for topics that really expose the flaws in modern society. (nb I dunno about Jesus being that funny)

Worst, travelling all the way to Hastings to find no one at the gig, being about 5 gigs in, I was too polite to tell the promoter to get fucked when he asked us to do our stuff anyway, so I did 10 minutes to no crowd and the promoter just looked at me smiling and nodding, like some weird comedic lap dance. I went all the way from Newcastle, and still I wasn’t the most famous man to have travelled all the way from the North East to Hastings just to die.

Best: Stand Newcastle weekend in January 16, getting a round of applause in every joke, in front of comedian I very much look up to, Tom Stade.

Best review: 4* from Fest mag who said I was ‘dripping with erudite genius’ and ‘schooled in the rat tat tat delivery of Chris Rock.’ Given he’s an influence, I’ll never forget that.

Worst Review: Edfringereview 2014: ‘Some of the worst comedy I’ve ever seen…. Nothing more than polemic and toilet humour dressed up as comedy, besides what humour is to be gained from terrorism and child abuse?!’ They’ve taken it down now. But kept the better one they gave me the year before. HAHAHAHA YEAH BACK DOWN BITCH.

Maybe a lawyer, maybe working in an NGO, probably dead.

Can you really criticize Donald trump for pulling out the Paris Agreement when you eat so much meat, which is obviously the biggest contributor to global warming?

No, but fuck me, my Chorizo tacos are too good fam. 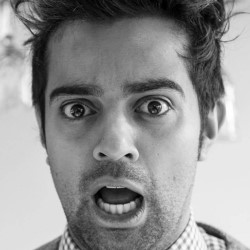