My show is a coming of age story about a teen boy discovering his sexuality one Italian summer to slow indie music ….JOKES, I am looking for laughs, not an Oscar. My show is an hour of comedy through the lens of an eternal optimist trying to make sense of this wild world. It includes my spiritual upbringing with my then-Scientologist parents, my Italian marriage and the general sentiment of wanting everyone to Read My Lips despite the fact that I’m not sure which set of lips I want you to read.

Most comedians tell no one they’re doing comedy for years out of pure humiliation, but I was the opposite – I brought along 12 friends to ensure I’d get laughs. This was half of the audience, so I killed and was like “Hello showbiz, bring on Broadway!” My second gig was to three drunk old men in a piss-stained pub who didn’t think my impression of Christina Aguilera doing one of her nasal, never-ending high notes was amusing. Comedy has a way of bringing you back down to earth. Quickly.

I always do the type of mouth exercises that pretentious theatre kids do because it’s so stupid and I want to make the other comics laugh (some of them join in earnestly…it’s so embarrassing for them I pretend I’m doing it seriously), but my general mantra is to remember that everyone has a bum hole and no one gives two shits about anything so just chill and have fun. Oh, and I generally rap Cardi B lyrics to myself.

My best reviewer is always my mum. She once said, “I love that one about me sucking dick, darling, it’s a strong opener!” (That is verbatim). My worst review is any review by guys who only love other guys talking about being awkward and un-bangable. I am not awkward at all and either mildly or extremely bangable, depending on the country.

If it’s someone from a country that I am extremely bangable in, then yes. I don’t care if you give me a 1-star, as long as you think I’m pretty.

It really depends on how they feel about me…

My nana is Jewish, so I was outraged for my family and my bloodline. But then I saw the dog and I was like: “If anyone can pull off the Nazi salute, it’s a pug.” But still fine the fucker! You always punch up in comedy, fool!

As long as you’re not being a weirdo sexist bigot using stereotypes of minorities to get a crazed “white pride” racist cheer, then let’s all unclench our cheeks and have a good old fashioned belly laugh. Comedy is trauma plus time, says the legendary Joy Behar. Icon!

Sexually, yes (that’s what makes it fun). Food-wise, a few times (I once cried myself to sleep after overdoing it on carbonara). Sartorially, definitely (ultra-skinny fit cords. I’m not proud of it). In comedy, NEVER. Only to people who are prudes, but that doesn’t count.

It was at The Classic in Auckland, my home city. It was my first gig in New Zealand after doing comedy in London for a few years and my family and friends were all there on a packed-out Saturday night. I was so nervous I’d bomb in front of everyone I’d ever met, I had phantom poos, heart irregularity and the dry horrors. But I tore it up (mainly because my mum had a few too many glasses of rose and ended up chanting my name halfway through the set) and left feeling all Adele in Hometown Glory. 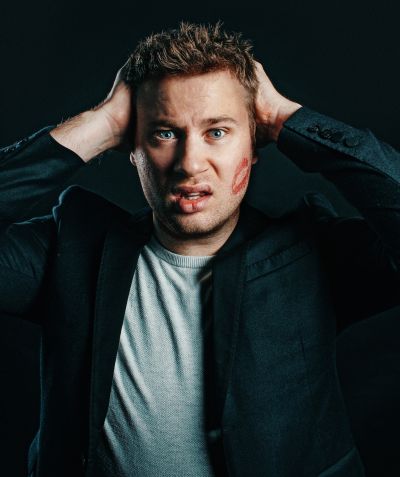