James Campbell is a popular comic and author who pioneered stand-up comedy for children. He’s performing at the Edinburgh Fringe’s Spiegeltent this year with his famous Comedy 4 Kids show. We have always tried to be child friendly, or at least parent friendly, so we emailed James six questions.

“My new Edinburgh fringe show will mainly be about whether you can selectively breed goats to make them really tall. I don’t want to give the ending away but it turns that you can’t. It’s something to do with reverting to the mean. So what I’ve done is written this as a collection of comedy for children. I know it sounds a little complicated but it really works.“

Tell us about Comedy 4 Kids.

“If think it’s quite self-explanatory but just in case: comedy is about finding another way to look at and question how we perceive things possibly aiming towards a greater understanding of the world and ourselves, but using the cloak of humour to keep ourselves interested. Kids are small people who can’t vote yet so nobody pays them much attention.”

What is The Big Book Babble?

“The Big Book Babble was a TV program that I used to host. A lovely company called The Book People produced it but I haven’t heard from for a while so I think it’s been cancelled. In the meantime, however, a Mexican television company have asked if they can do a version of the show with a puppet representation of me. It turns out that I don’t even have to be there and they paid me a nice amount of money for the formatting rights even though I don’t own them. Which is excellent. We’ve used the money to buy a new kitchen and a 1971 Triumph Herald.“

Will you be writing more children’s books?

“Yes. I can’t stop writing them. The first Boyface book comes out in June and the second one at the end of August. It’s called Boyface and the Tartan Badger. I shall then be finishing off books three and four. I’ve already plotted out five, six and seven but am struggling with eight. I’ve also just written a book of horror stories, a book of poems and a book about evil lollipop ladies and a little girl called Apostrophe, so called because she’s always in the wrong place and no one is really sure where to put her.”

Is performing for children more demanding than it is for adults?

“I think that all of my work is as demanding as I choose it to be.“

If you were curating a family comedy show for TV, who would be your guests?

“If I were curating a family comedy show on TV then it would be plain that something had gone very wrong with my life. I would probably seek professional help in the form of surgery or voluntary commitment to an asylum.” 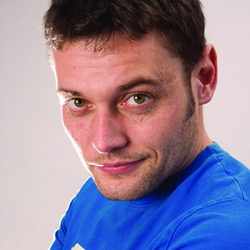