As a child, Markus Birdman’s father – a vicar – made him draw Bible stories. Unfortunately he doesn’t remember these stories, but as a grown-up he’s pretty good at drawing. Markus has been an art teacher, graffiti artist and sculptor’s assistant and his Edinburgh Fringe Show, 2B Or Not To Be sees him putting his skill for sketching to blasphemous effect. With added jokes.

“2B Or Not To Be is a departure from the straight stand-up story shows I have previously done. It will still have my perennial themes of sex death and religion, hence the Shakespearian title alluding to death, but I am introducing a more visual element with drawings and pictures to illustrate what I am banging on about. So expect my usual bombastic athletic style to be replaced by a more measured pontificating with pictures. That’s the 2B bit, because it’s a pencil.”

How many Fringe shows is that now?

“This will be my tenth year and my seventh solo show. Good grief! For me the attraction is that it makes me write, which makes me get better. Without that deadline I would be less motivated to create. Why revise if there is no exam. Plus I really enjoy watching other comedian’s shows to see what they are up to, and to hang out. I have some great and inspiring friends in the industry and Edinburgh is a good chance to meet up. I also enjoy watching non-comedy shows. Recently I have become obsessed with modern circus, so much of which is coming out of Australia. In Edinburgh you can always find me in a big top or Spiegeltent.”

You’ve performed at the New Zealand, Adelaide and Melbourne Comedy Festivals. How does Edinburgh compare?

“Edinburgh is like the ultra-marathon of the festivals. It’s probably the least pleasant, least enjoyable, and most painful one to do, and yet the most prized. This is not just my view but also one pretty universally held by comics. But it is the one we all really want to succeed at. The other ones are in warm countries with friendly people who like the English and are generally supportive of your efforts to come to their city to set out your stall. Where’s the challenge in that!”

How do you feel about the BBC axing BBC3? Is the BBC right to ban all male panel shows?

“In honestly I don’t watch TV, let alone BBC3, so I’m not really in a position to comment. That said, I don’t suppose it’s going to improve the standard of comedy on TV. It’s not a unique position, to take pot shots at TV comedy, but that doesn’t mean it isn’t justified. If the BBC looked at the comedy it used to produce in the 70’s and 80’s, and compared it to what it produces now, it ought to be ashamed of itself. As for all male panel shows, giving them gender stipulations will not plaster over the cracks of a very tired and hackneyed TV formula. They are all horrid and I cannot lament enough how much they have become the arbiter of talent and success within the industry. Putting more women on wouldn’t make them either better or worse.”

So if you were curating a stand-up show for TV – who would be your guests?

“This may come across as very sanctimonious, but I wouldn’t waste my time to be honest. I’m not being self-righteous or bitter about it; I just feel that comedy should be a live performance event in small dingy underground clubs, to no more than about 200 people. Stand–up is not a medium that translates well if at all, to TV, for so many reasons. There is a misconception that a comedian just wants to get on TV as a stepping stone to play enormadomes. Many of us are very serious about it as an art form and as a means of creative expression, and find this model pretty uninspiring or even repellent. And I should stop now before I commit career suicide!” 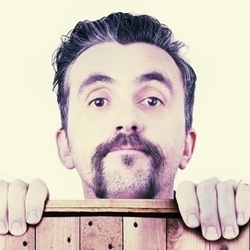