Manic Pixie Dream Girls is the antidote to pale stale male comedy. A fuck you to crusty chauvinism. It’s pure undiluted joy, and ALL of y’all are invited… This is what they had to say…

Manic Pixie Dream Girls is the show your grandmother would take you to see if your grandmother was god-damned Gloria Steinem. Our goal is to bring atypical acts to the forefront and big-up female and non-binary comics, so our headliners include trailblazing beauts like JOSIE LONG, DESIREE BURCH and MAWAAN RIZWAN. We’ve even got a few token cis straight white males like IVO GRAHAM and CHRIS TURNER, because, you know, we thought they deserved a chance. Plus, we donate all our profits from the bucket to grassroots organisation WOMEN AGAINST RAPE (WAR) so that they can continue supporting women who have experienced sexual and domestic violence.

Edinburgh means rolling with the OGs (original gangsters) of comedy, meeting our heroes, walking starstruck in the footprints of dinosaurs. And also scampi slathered in hot soss from City Chippy.

We are inspired by the women who DGAF – who slay in the face of hate, bigotry and discrimination. Women like Lindy West, QUEEN DI(ane Abbott), and the muse of our last show – Malala Yousafzai.

We are inspired by those spray on glitter shirts that make it look like you’re wearing clothes but it’s just glitter. We are inspired by really well done jerk chicken patties, that don’t fall apart, but also don’t have particularly thick crusts, so you can walk and eat but get the full hit of flavour as it was meant to be enjoyed.

One of us got put in a headlock and the other one groped by the same male audience member who we were using as an audience volunteer. #Boyswillbeboys #NotAllMen though, am I right?

One of our best shows of last year was a barnstormer headlined by EMMA SIDI. One middle-aged middle-class white male reviewer came to the show and wrote later “Everyone was laughing uproariously and I didn’t know why”. We were ecstatic.

We would be sexy felons, as in the 1973 crime drama BLACK MAMA, WHITE MAMA.

“I Love Dick” by Chris Krause

What are you wearing?

It would be called COMEDY BAE-WATCH and it would be a stand-up slamdown featuring all our faves.

We’d build an uber #SQUAD, and we’d enlist legends like SARA PASCOE, BISHA K ALI, ELF LYONS, EVELYN MOK and oh so many more. The house band would be HOT BROWN HONEYZ. There would be a companion show called ‘Comedy Bae-Watch: The Love-In’, where viewers watch all the acts just laying on a couch in the Green Room together while Enya plays softly. No one would ever be eliminated.

Love Island, eat your heart out. 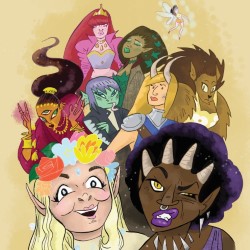