Jim Holland is a polite comedy maverick who brings intelligent wit, conversational delivery and two-tone shoes to the Brighton and Edinburgh Fringes. Martin Walker joins him for a spot of Shoegazing.

“Shoegazing is my first solo hour of stand-up. I’ve been doing comedy for a few years now – gigging lots, trying to find my own voice, trying to blend my rather silly humour with a more philosophical meaning – and as a result people often come up to me and say, “Ooh, I like your shoes!” So I thought I’d try to ride their popularity.

“Despite the flashy two-tone shoes, I am a bit of an introvert. I don’t like to blow my own trumpet so would say it’s about shoes, shyness, and love. Other people have said it’s charming, honest, and funny. Put them together and I think that covers it: charming shoes, honest shyness, and funny love.”

You’ve shared a stage with the legendary Daniel Kitson…

“I had only done a few gigs when I sat in the front row of his Edinburgh show, The Honourable Men of Art. A rookie mistake. The show also featured David O’Doherty. Before introducing him, Kitson dragged me out of the audience, got me to sit on his chair and told me not to budge.

“O’Doherty arrived onstage to find me in his place. He protested, even kicking the chair, but I dutifully stayed put. So he dumped his Casio keyboard in my lap, angled the mic at me and left.

“I was stranded in front of a crowd of people laughing at my predicament. At this point, I’d done a few gigs and thought of a few jokes. Should I tell them? Try and join in with these comedy legends?

“No. I decided to fool around with O’Doherty’s keyboard, getting the tinny drum machine going and repeatedly pressing one note. I heard someone rapping along, looked to my left and realised I was accompanying Daniel Kitson. It’s one of my proudest moments.

“My friend said he almost took a photo but he was scared what would happen to him.

“But it’s given me a quote which sounds great out of context. I got off stage and David O’Dohety was back in control when I heard: “Don’t worry David…

Tell us about Charity Chuckle

“Charity Chuckle is a monthly stand-up night that I co-founded five years ago and now run with fellow stand-up and marketing expert extraordinaire Kerry Herbert.

“It’s become a bit of a Brighton institution now. It’s the laugh with the feelgood factor as we raise money for local charities. We moved to the Komedia last September and guests have included Al Murray, Hannibal Buress, Josh Widdicome, Sara Pascoe, Lucy Porter and me.

“This year, for the first time, we’re taking the show up to Edinburgh and raising money for local Scottish charities. Charity Chuckle will be at The Fancy Room, Just the Tonic at the Caves, every day from Saturday 2nd to Sunday 10th August at 4.45pm. Then afterwards you can come and see me at the Wee Room in the Caves at 6.20pm. And then come back the next day too. Thanks!”

You recently attempted to set a world record.

“The third preview of Shoegazing was in my home town, Portsmouth, as part of Joe Wells’ Guinness World Record breaking comedy show for The New Theatre Royal. The show lasted three days. I was on at 7am on a Monday. It’s the first time I’ve got up before dawn to do a gig. I felt like I should be delivering milk, not gags.

“The crowd had been up all night. I told them I’d try not to wake them. That got them on side.”

Tell us about the graphic novel.

“I had to give up comedy for a year to look after my parents who were ill. During that time, I was picked in a competition to write the opening story to Brighton: The Graphic Novel. The book is a fictional history of Brighton. I am very proud of it. I got to collaborate with artist, Chris Hagan, and a host of comics people, and it kept me doing something creative when I couldn’t travel around to gigs. I got to be on a panel at Comic Con and sat in the green room with Brian Blessed and Billie Piper. I was too shy to talk to them, of course.

“My story, Seawater, is about a fisherman in 18th century Brighthelmstone. It’s about creativity, family, loss and love. And fish, obviously. The book can be bought from www.queensparkbooks.org.uk.”

You were nominated for the Metro’s “a little bit of decency” award.

“I was put forward for a Little Bit of Decency Award mainly because of Charity Chuckle – our monthly comedy night raising money for local charities – and also because I had been maintaining a sunny disposition, or at least a no-more-dour-than-usual disposition whilst my parents got ill, my day job was under threat and I was diagnosed with a kidney disease. None of this is in the show by the way. The show is about shoes. They’ve got much more light-hearted soles. There’s no puns in the show either.”

If you were curating a stand-up comedy show for TV, who would be the guests?

“Kitson, Lee, Hicks, Izzard, Pryor, Bailey, Sadowitz, and me. I’ve put myself at the end of that list because: “Jim’s a hard act to follow” – Daniel Kitson.” 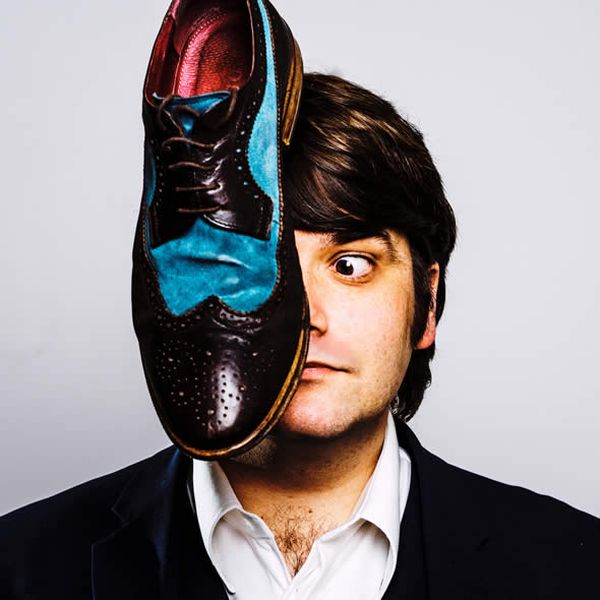