Richard Brown, one half of last year’s Angry Beards, presents his debut Edinburgh show this year as part of the Free Fringe. The show, This Is Not For You takes a cynical view on society, a view expressed through intelligent, alternative comedy.

“I was reading about clowning and somewhere on Wikipedia it says that a buffoon’s ideal show would be one where the audience thoroughly enjoy it, go home, realise their lives are meaningless then kill themselves. I had that in my head when I wrote the show. I wanted to make it apply it to stand-up. That said, some bits are just escapism. It also includes the now fairly standard comedy about comedy about comedy ad nauseum. The show is called This Is Not For You, which is the dedication in the novel House Of Leaves. I’ve used it as the title to try and stop people coming expecting observations about shoes, or whatever it is that people like. I’m not trying to be a snob; I just don’t want to waste anyone’s time. I think it’s a good show if you like alternative comedy. Plus, it has an ending now, which it didn’t have when I performed it in Glasgow and Leicester, and that has to be a good thing, right? Come see my show, it may not be for you but it does have an ending!”

How long have you been a stand-up comedian and what got you into it?

“I’ve been doing stand-up for almost 3 Years, which is nothing, really. I loved stand-up when I was a little kid but I wasn’t really allowed to watch it because of the naughty words, which only made it more exciting. I had to go visit friends who had less responsible parents and a Billy Connolly VHS. In my early twenties I was introduced again to Stewart Lee (I was a big fan of This Morning With Richard Not Judy as a child) which led me onto Simon Munnery and Daniel Kitson and this world of off-beat and exciting comedy. This is a boring answer but I’m not sure how to make it interesting. The night I signed up to do my first open-spot the headliner was Darren Connell and he dropped his jeans onstage and simulated sex with a bar-stool. I can’t remember why that happened but I almost died laughing.”

“A friend once said ‘I like the disarming nature of your hatred,’ which I think is fair. I’m not fond of the modern world, but I’m not aggressive about it. Words like ‘misanthropic’, ‘sardonic’ and ‘drunk’ pop up in reviews, but I doubt the latter will be that relevant at The Fringe since I’m doing a midday show.”

How did the gigs at Leicester and Glasgow go?

“In Leicester I saw a man with no legs playing an accordion.

“The shows themselves were fairly uneventful but I think they were good. Not achieved-the-goal-of-the-buffoon good, but heading in the right direction.”

Not that you want to be on TV, but if you were curating a TV show, who would be your guests?

“First I’d get Geoff Gawler, who I did ‘Angry Beards’ with last year, and David Callaghan because they moved to Australia and England, respectively, and I miss gigging and drinking with them. They’re the type of people who go ‘you think it would be funny to go onstage with your shirt off and scream poetry at people? Yes. Do that.’

“I’d get people I admire for their writing ability, people like Morgan Murphy, Hannibal Burress, maybe Keiron Nicholson. Then I’d get high-energy comics who excite me because you don’t really know what’s going to happen when they take to the stage. The likes of Pearse James and Paul Curry and Sam Simmons and Gus Lymburn. I’d make the high-energy performers do all the writing and I’d make the writers do high energy performances, just to see what would happen. Eleanor Morton is an exquisite joke writer, so she could do the music. I think she’s also a fairly talented musician though, so she’d have to play the music on a ruler or a potato or something.

“It would probably be for the best if you didn’t put me in charge of television.” 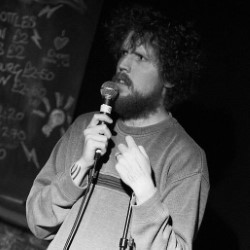