Rahul Kohli has been performing comedy for almost two years. He says that it was something he’d wanted to do ever since he was fifteen when he saw Kevin Bridges live at The Comedy Store. Martin Walker asks how he got started.

“At university, a few friends told me I had the right personality and abnormalities – still not sure if it’s a compliment – to get involved in stand-up and advised me to give it a go. There is a huge difference between telling a good story and cracking a few jokes to a bunch of guys who know and trust you to going on stage and putting your nuts on the line in an attempt to make a room full of strangers laugh. One year nine months down the line and I am only more painfully aware of that.

“Then I found myself a year away from finishing university, and thought about what skills I actually had, and what I would like to do after university. I thought, I have the ability to chat shit and I can make people laugh. I just thought to myself, ‘Can you make any money at all off chatting shit and making people laugh?’ And it just started to add up.

“I was working that summer in a bar in London during the 2012 Olympics, and decided I might as well try my hand at it. I did five minutes at Comedy Virgins at the Cavendish Arms Stockwell. It went really well, and it’s been going well since, and I’ve never looked back.”

Tell us about your work with Spice FM.

“Spice FM is a community radio station in the North East of England. I knew a few people involved with the station, so I approached them and asked if I could do a panel based comedy radio show on the current affairs of the week. While they had a few current affairs based shows, for example “Talk of the Tyne” hosted by Labour Councillor Dipu Ahad and journalist Yvonne Ridley, they had absolutely no comedy when I approached them. They felt I was offering something different, something new, and something the station hadn’t done before, so fast-tracked us to the slot of 10-11pm every Monday. I got Cal Halbert, a brilliant comedian, and comedy impressionist on-board as my co-host and it’s been brilliant since he joined. The aim of the show is to engage the youth vote with politics through just dissecting current affairs, for the vast amount of humour they do actually contain, as the 18-25 demographic tend to see politics as something too serious, too divisional, and too boring to engage with. It isn’t just politics, we have a wacky and weird news section, this week we talked about the snake who ate a wok, the endemic of sheep getting high in Australia, and a house party that brought the roof down… literally. The party was so loose, the house collapsed! As well as the usual on UKIPs rise, the Coalitions botched legislation, and Ed Miliband’s captivating personality and charm.

“It’s been going about a month now, and it’s been getting a pretty good reception. People are listening, people are texting in, and it’s all in all getting good feedback. The show can go down any avenue, this week we have political comedian James Spencer joining us so tune in 10-11pm, 98.8fm if your NE based, or find Spice FM on the Tunein App and see what it’s all about yourself!”

How do you feel about UKIP?

“I see the rise of UKIP in four different ways. For one, I’m an advocate of free speech, but I am also aware people don’t have all the information in front of them, and humans as a whole really do struggle to make fully informed rational decisions, and when you see this charismatic far-right leader, Nigel Farage, playing on these fears and emotions about community tensions and economic failure, articulating them so well and playing on these fears so well, while promising to restore Britain to the great country it once was, following a financial crash that has led to strict austerity measures… It just all seems a bit scarily familiar… but I’ll stop there before I get sued for libel.

“The second however is that I do think there is a tendency to write off a lot of real people’s concerns about European integration and community tensions at large, and while these people often get taken the mick out of, and UKIP get ripped apart, they are set to win the next European election according to the polls, so obviously a significant number of people do have concerns that we need to address, and let them know that UKIP isn’t the answer as opposed to just writing them off as looneys, racists, and just taking the piss out of them and their concerns.

“The third way I see it is that, as a comedian, ultimately it is fucking brilliant for material, so you lot can explain to them that UKIP isn’t the answer, and address their concerns, I’m gonna write them off as looneys, racists, and take the piss out of them and their concerns… but I’m going to do it on stage… so it’s sweet. If there are any comedians also going down this route at the moment, I do apologise in advance for taking your job.

“Finally, on the wider scale, it has led to an implosion of the far-right. UKIP, EDL, BNP, Britain First. Racism has become so diverse. And with personalities like Nigel Farage taking the helm. Racists are becoming also a lot more colourful. Racism is the new black one may say, but it’s causing huge cross-party divisions. UKIP were claimed by the BNP just last week of being racist! THE BNP! CLAIMING UKIP ARE RACIST?!?! Talk about the pot calling the kettle a Paki.”

Have you got any thoughts on the axing of BBC3?

“There was a lot of noise about the axing, particularly from the comedy community, as for a lot of comedians it has been a route from the circuit to TV, for example through sketch pilots or Russell Howard’s Good News. There are many other vehicles and routes out there, I’m seeing people I’ve gigged with to an audience with three people at open mics popping up on the comedy store, 8 Out of 10 Cats etc, so if it is meant to be, it is meant to be.

“As part of the 16-25 demographic who BBC 3 is aimed at, I don’t think I’ve ever watched it on the TV, I only watch it on iPlayer, and that’s the direction they’re taking it so fair enough. On the bright side hopefully this means less 17 year old lads getting caught by their mums snorting ketamine off a ladyboy’s tits in Magaluf.”

“For me, the compere is Kevin Bridges. Kevin straddles big room and intelligent leftfield comedy perfectly. He manages to make some of the most complicated topics so accessible. His call back referencing the world as ‘an empty’ is one of the best jokes I’ve ever heard. He also has a Glaswegian charm that just makes him impossible not to love, and he can keep the audience hyped all night.

“Your opener is Chris Rock. He is so intelligent and can tackle the most contentious social issue of the day with ease. The first comedian I ever saw. His joke on bullet control is my earliest memory of laughing at a comedian telling a joke on stage

“Your first middle is Stewart Lee. I have seen every single television programme/DVD/musical he has ever been in or helped produce, and he is without a shadow of a doubt the most technically gifted comedian that there has ever been.

“Your second middle is Alfie Brown. I first saw Alfie supporting Daniel Simonsen in Sheffield. I liked him so much; I kept tabs on him, and saw his show at the Edinburgh Fringe 2013. It was easily the best show I saw. Alfie does what the first two comedians have done and combined it with the finest touch of what Stewart does as well. Contentious, controversial, contemporary but most of all very very intelligent and even more funny.

“Your headliner is a comedian everybody knows, but not many know did stand up before he went big time with the movies: Jim Carey. People know him for his impressions, expressions, acting and general air of insanity. On stage he combines all of this with hilarious and deep material. Rarely do you get a comic that can bring all these different facets together and make it work so well.” 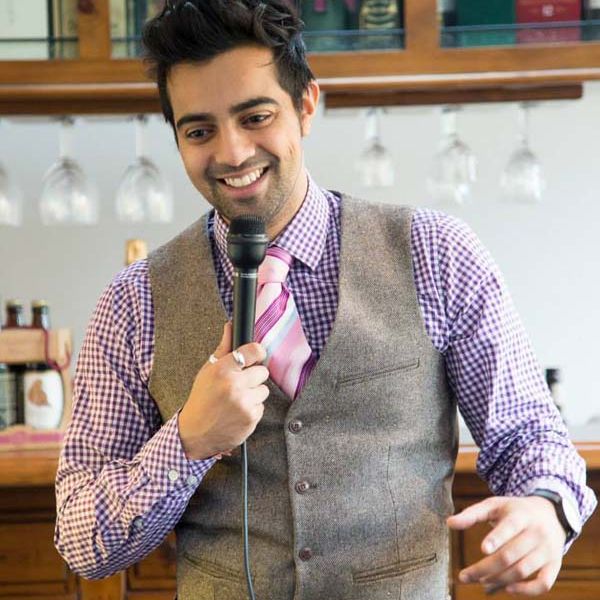