Recorded at the Stand Comedy Club, Jo Caulfield’s ‘The Good, the Bad and the Unexpected’ podcast weds improvised comedy with storytelling. She devised the format with collaborators Kevin Anderson and Richard Melvin and recently had a family friendly pilot version broadcast on Radio Scotland.

“The Good, The Bad and The Unexpected” is the ultimate live comedians panel-show. Four comedians onstage, working off each other’s lines. No-one is censored, no-one is sober. It’s relaxed enough that the comics can make off-the-cuff remarks, but they’re still very much on the ball and chasing laughs. Often at each other’s expense”.

The Glasgow Comedy Festival hosts the show for one night only on 31st March. A night, we are promised, that definitely won’t be suitable for broadcast.

“The Glasgow show is a brilliant line-up: Mark Nelson, Bruce Morton, Julia Sutherland and a Special Guest. Oh, and me. That’s the one you really care about, right?”

Jo’s been performing since she was seventeen, when she left her East Midlands home to sing and play drums in a Rockabilly band. (“This was an unusual decision as I can neither sing nor play drums”). It wasn’t long before she discovered a natural flair for comedy – after winning an open mic spot in The Comedy Café in East London. (“Although I hadn’t prepared anything and could hardly stand, let alone speak, I won the competition and was asked back for a 10 minute booking the following week”).

The buzz she felt during that first performance is clearly still with her.

“The best experience is always just doing a new piece of material; the thrill of a new bit working is a complete rush. Doing new material and improvising with the crowd will always get the adrenaline going”.

I suggest that a life in comedy must be a bit of a roller coaster, with many highs and lows.

“If I may show off a bit, one of my best moments was doing a set at The Comedy Store in London, when the comedian Chris Rock was in the audience. Six months later I was in New York writing on The Graham Norton show (that was great too) and Chris Rock was booked as a guest. I was keeping out of his way because I didn’t want to be an annoying fan but Chris saw me in the corridor and said, “Hey you’re that comic I saw at The Comedy Store, you’re really funny”. I can die happy.

“I’ve certainly done some weird gigs. I did a show in Berlin where I went on after a man wearing a leotard made out of leaves who danced with a balloon. Then I was followed by an impressionist who did Hitler ‘as a driving instructor’!

“But the worst experience was doing a gig in a basement bar in Soho. The whole audience was a group of Belgian tourists who didn’t speak any English. I’m sure they were expecting a pole dance or some topless comedy at the very least. The look of disappointment in their eyes will stay with me forever”.

Jo is currently touring the UK with her latest show, ‘Celebration of Anger’.

“I’ve always wondered why anger is seen as such a bad thing? To me, there’s nothing more satisfying than having a good rant about something. That’s what I’m doing. I’m an idiot railing against the little things that drive us all crazy: vacuous celebrities, endless TV quiz shows, arrogant shop-assistants, emotionally ‘challenged’ men, drunken girlfriends who always pick the wrong partner, and a husband who continually quotes The Godfather. With all that to deal with surely having a good rant – and Celebrating the Anger – is the only sensible reaction?

“On this tour I’ve been everywhere from Inverness to Cornwall. Then back up to Inverness because I forgot my makeup bag. I’m not complaining. I’ve found out that Britain has 100’s of great little art centres, all staffed by hard-working volunteers.

“The worst thing is being so many miles away from my husband…and knowing I have to go back home to him at the end of the tour.

“The tour ends in July, and then I’m straight into the Edinburgh Festival with my new show: ‘Cancel My Subscription’”.

Jo will be performing every night at 7.10pm from August 1st till 24th at The Stand Comedy Club.

“The Stand is my favourite venue. There’s also a couple of radio shows in the pipeline, and we’ll continue putting the ‘The Good, the Bad and the Unexpected’ podcasts out”.

If I was putting together my own TV show I’d really like to see Boothby Graffoe, Mick Ferry, Mike Gunn, Ian Moore, JoJo Sutherland, Alistair Barry, Ben Norris and Janey Godley….sitting in the audience. I’m sure they’d enjoy watching me. 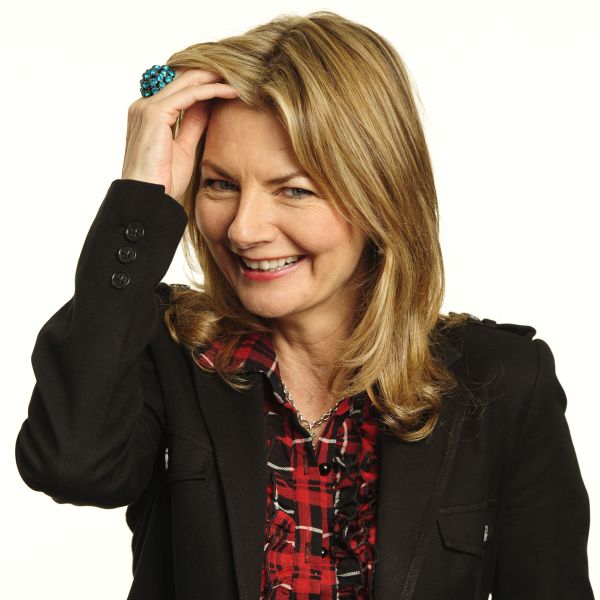