Comedy Snapshot by Steve Best, is a book featuring a comprehensive set of stand up comedy faces from the current UK circuit. It showcases over four hundred black and white photographs – with associated quotes collected over seven years.

“I’ve always been into photography so more often than not I would have a camera with me at gigs. So click, click at most gigs. I used to post the pictures up on my website and on Facebook. It wasn’t until early 2013, chatting to a few comedians that they and I thought there might be more to this… around March/April 2013 I started writing to the acts for their info with a book in mind.”

I wonder how Steve chose which comedians to photograph.

“Absolutely depended on who was in the dressing rooms at the gigs I was on. I think the first photograph was Ross Noble in 2006 with a camera phone. The design and proper work started in September 2013.”

Many of the quotes and one-liners from the comics are downright hilarious – but it must have been some job coordinating it all.

“I just wrote, emailed, Facebooked, texted the acts. I think my standing and friendships on the circuit allowed me a little more access than a wandering photographer.”

“I’m getting some great feedback, from comedians and the industry – people are viewing it with a little nostalgia, as the circuit changes, and evolves…

“I decided that I wouldn’t order the book, alphabetically or otherwise – in fact it was dictated more by a creative feel, how well the pictures looked on the page – comedians wearing glasses, their eyes matching…”

“There’s still a load of comedians I would love to get, of course the biggies, Jack Dee, Jimmy Carr, Bill Bailey, Dylan Moran and the like, who I never managed to take a photo of.

“Also, I did photograph Kevin Bridges and Phil Kay, but sadly I couldn’t get hold of them in time.

“I’ve continued to take photos so depending on how well the book does I could maybe get together another one in a year or so.

Steve is of course, a popular stand up in his own right.

“I’m performing a bit less now, but still performing in the usual places. I try and keep my diary updated on my own website www.stevebest.com

Will he be around at the Edinburgh fringe?

“I should be really – get a stand for the book somewhere. I’ll hopefully talk to the Pleasance and Gilded Balloon and other big venues to maybe try and stock the book there. Waterstone’s have said they want the book and so come the Edinburgh Festival they’ll hopefully have a load in their shops.”

So if he were curating a stand up show on television, who would be Steve’s guests?

Not in the book – Bill Hicks and Steve Martin. 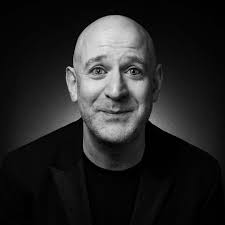