Potty Training with Joey Rinaldi is my solo show about a near death penis injury I endured when I was fourteen years old. While I was rough housing in middle school attempting a parkour stunt I accidentally crushed my taint, which made my bladder stop working and led to me being the only kid in my town who had to involuntarily urinate through a catheter that was attached to a pee bag. Although there are naturally a lot of dick jokes in this show, it is much more than a broken penis story. Potty Training is a coming of age story about self identity, the relationship between a son and his neurotic, worried sick mother and discovering that we are not defined by our cringey flaws, but how we overcome those flaws.

Beyond the fact that it’s always been a dream of mine as a comedian to perform in the largest arts festival in the world where I will be surrounded by tons of talented performers, what attracts me to the Edinburgh Fringe is honestly the audience who attends the festival. In New York City where I’m based there is this strange tension between comedians and audiences. That is due to the fact New York City is overpopulated and over saturated with tons of events happening every single day. It feels as if audiences can get bored very easily so comedians have this pressure to get the audience’s attention as soon as possible. There’s this ideology that comedians must tell as many jokes per minute as humanly possible. Even though I do love doing comedy in New York, I never truly feel that they are my audience. I’m a long form storytelling comedian who shares personal and funny stories that have moments that are not always so funny. I’m not afraid to be emotional and open about my feelings on stage even if it means going several minutes without telling a joke or hearing a laugh. Based on everything I’ve researched about the Fringe I’ve learned that the audiences encourage long form comedy and want a full story with an emotional arch. So I’m coming across the pond, to find my audience.

Mike Birbiglia and Bert Kreischer are two comedians that have inspired me the most. When I first started doing stand up I had this feeling it was my duty to go into it to change peoples lives, have a profound effect on people’s minds and attack giant political and religious issues. My early influences were comics like Dave Chappelle and George Carlin, and I was convinced I was meant to be like them and had to be like them. But after a year of doing stand up I realized that I’m not smart enough to do that style of comedy, I don’t care enough about politics or religion to be that type of comic and I’m naturally not a preachy person so I have no reason to force myself to begin preaching. Thankfully, around that same time I discovered Mike Birbiglia and Bert Kreischer. These two comedians, who in many ways are very different performers, both do one thing fundamentally the same. Birbiglia and Kreischer both share personal stories on stage, no matter how embarrassing or cringey they may be, they go for it. At no point during their acts are  they trying to convince people what is right or wrong, all they are doing is trying to connect and relate with their audiences about the wild experiences that they have endured. Everything about me as a performer clicked when I discovered them, since this who I’m naturally am, with my friends, family and strangers I just met. The second I began attempting this style of comedy, stand up no longer became difficult to me, it no longer became something I was terrified of doing. It is now my favorite thing in the world, my happy place.

There are several shows I’m dying to check out but the main two shows I’d love to see are Ben Miller’s Stand Up Science and 1 Ball Show by Terrance Hartnet. Ben Miller is a good friend of mine, but I only know his stand up act. In his show Stand Up Science he does a whole hour only doing jokes that are science related. So I’m excited to see somebody I’m both friends with and a fan of perform an hour dedicated to something I know he is passionate about which is science.

Terrance Hartnet on the other hand is a comedian I’ve never met before. But I keep hearing through the grapevine that he is not just an incredible comedian,  but has somewhat a similar story to me. He did not exactly break his penis, but he did suffer testicular cancer and lost one of his balls, hence the name of the show. I’m very excited to see someone with a similar story because I know it will definitely make me feel better about my own penis related injury.

Why this story? What made you choose this story to turn into a one man show?

Believe me my broken penis story chose me, I did not choose it. This whole thing started back when I was a sophomore in college, taking a creative writing class where we had to write a story about the craziest thing that ever happened to me. I met with my professor and after I pitched her some of my stories she did not approve of any of them. Then I finally told her about how I basically broke my penis, and she was hooked. She did not just make me write that essay but she made me submit it to our school’s non-fiction magazine.

I had no intention of using that story for anything ever again. But as a new comedian I felt I had a hard time connecting with the audience. On a whim I brought up this story on stage, and something clicked where I felt I had the audience in the palm of my hand. Still, I did not want to share this story. But once word got around the city about this story, I had friends begging me to share this tale on podcasts, stand up storytelling shows begging me to share this on their shows and before I knew it, I felt like I had to do this as a one man show once in for real. Even though I spent a lot of my life not wanting anyone to know this story, I’m glad comedy force me to start sharing it, because I can tell every time I share it my audience gets a lot out of it. I feel it makes everyone go home feeling much better about themselves since they get to say “thank god I didn’t break my penis.” 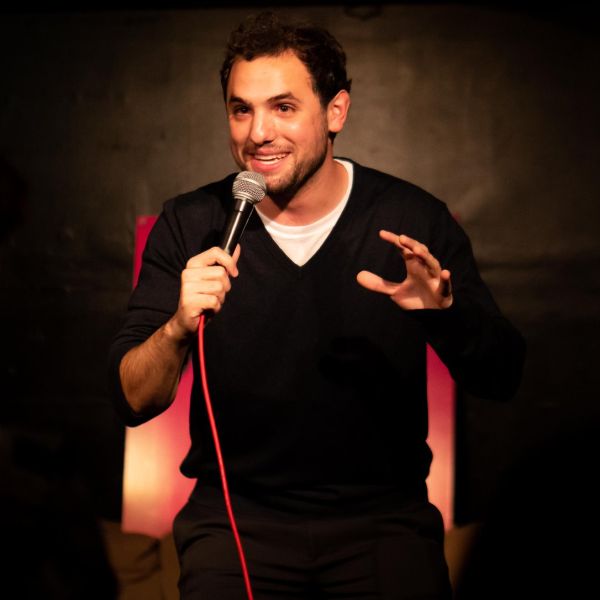