Disco Ball is a coming-of-age story written and performed by an adult who is learning to accept herself in all of her imperfect humanhood and celebrate that knowing yourself can bring you so much joy and happiness! And all of that is, naturally, set to some pretty funky beats! At its core, it’s a party, a celebration, and a very silly hour of fun!

This is your debut musical-comedy hour in Edinburgh! You’re an actor, a multi-skilled musician, and an accomplished stand up comedian, but which comes first? Are you a musician that tells jokes, or a comedian who plays lots of instruments? A serious actor having fun? Or something else?

Like my aunt used to always say: “you are something else!”…I could never understand if that was a positive or negative thing to be, but let’s just presume it was always meant positively! Why be defined by boxes? At the end of the day it doesn’t really matter, as long as we all have fun! It just means that I have a few silly things in my shiny inflatable toolkit that I have popped into this high-octane fiasco that I’ve called “Disco Ball”. One other skill that I have is dancing. This show is FULL of dancing. Incredible dancing!!! Yes, I may have body slammed myself on the floor just before my Dance A Level exam giving myself a full body bruise and making it incredibly hard to perform my balletic choreography, but that doesn’t make me any less of a dancer. Even if the examiner gave me an E for it because I couldn’t fully extend my leg. I am also an artist, even though I can’t really draw. (Why be defined by boxes!) All I will say is that the word “serious” has no business being used near me – I once got given a warning during a rehearsal for a musical for not taking my job seriously enough because I fell over during a dance routine and giggled at myself. Apparently, serious actors do NOT fall over. Ever. Am I a serious actor? All evidence points to a no. Can I actually draw? No absolutely not. Will I ever be able to perform a dance routine without falling over? Come and see the show to find out!

Disco Ball is directed by the incomparable Ben Target. How did you hook up with him? What is his role in the Disco Ball?

Ben Target is one of the most talented people I know! We first met when we gigged together at James Ross’ “Quantum Leopard” show – which is always an awesome night out (big recommend)! And on the night we were performing, Ben was headlining the show and he was absolutely incredible! We buddied up and I’ve been to see all his shows since, including Joz Norris’ show “Joz Norris is Dead Long Live Mr Fruit Salad” which Ben worked on too. Joz Norris is fantastic, and you should definitely go to see his show “Joz Norris: Blink” on at the fringe this year!! So, once I’d learned that Ben directed shows, I thought it would be amazing to work with him as a director, and eventually I plucked up the courage to ask him if he’d like to come on board to direct my show this year, and he (thankfully) said yes! Having Ben Target involved in my show as Director instantly made it better, and he is such a talented joy and pleasure to be working with!

Before lockdown you won at the Musical Comedy Awards. How did that feel?

It was AMAZING!!! It had always been a dream of mine. I got to the finals in 2017 whilst going through one of the worst patches of my life, so even just being able to stand on the stage and do my set was a huge accomplishment at that point. I was so proud that I got as far as the finals in 2017, and I learned so so so so much being in that final! So much of comedy has to be learned whilst performing, so that final in the West End’s Lyric Theatre was a giant massive steep learning curve! Like ginormous!

So, when I decided to compete again in 2019, I was just really wanting to give it my all at 110% enjoyment of every gig. I was in a far better place mentally and physically, and now that I’d learned so much from the 2017 final, I just wanted to get up on that stage and love every second. And I did! The line-up at the finals was immense – so many awesome people on the line-up, all very talented, all hilarious, anyone could have won! I’d also just come off the back of two other competition finals, so I was now used to the nerve-wracking feeling of a final, and I just thought “well there’s absolutely no way I’ll be in with a chance of even placing within the top 3 with this incredible line-up” so I stopped putting pressure on myself and messed around backstage with all my musical comedy pals having the best time.

When it came to the announcements, none of us really could guess which way it was going to go! When my name was called out, my first reaction was actually disbelief, because I really didn’t think I was going to place! It was all a bit of a fizzy blur to be honest. I think I even apologised? And then it set in that I had won, and I honestly couldn’t believe it! On the videos and photos you can see me crying as I walk across the stage to accept the award. It just meant so much to me that in two years I had managed to pick myself up build myself back and do this competition and have an incredible time AND win??!!!! It was honestly one of the best days of my life!

I don’t think awards are everything, and sometimes it’s unhealthy to keep striving for awards because you can miss out on all the joy and pleasure that is to be had in the journey, but at this exact point in my life, it was exactly what I needed, what I wanted, and the reason I didn’t quit, and for that I am so grateful to the Musical Comedy Awards, for all of the judges, for everyone that voted for me, and for all of the incredible acts that were on the line-up that night making it such an epic gig to be a part of! I honestly couldn’t believe my luck! 2019 me was honestly living my best life, and that was in huge part down to the Musical Comedy Awards, to 2Northdown New Act Competition, and to getting to perform on the main stage at Leicester Square Theatre for the Sketch Off! Competition, followed by a super fun run in Edinburgh, a spot on Harry Hill’s Clubnite in Mat Ewins’ hilarious sketch, and getting to do panto with Mark Read from A1 and Ian Waite from Strictly Come Dancing!! Wowsers trousers what a year!

Sum up the show in three words? 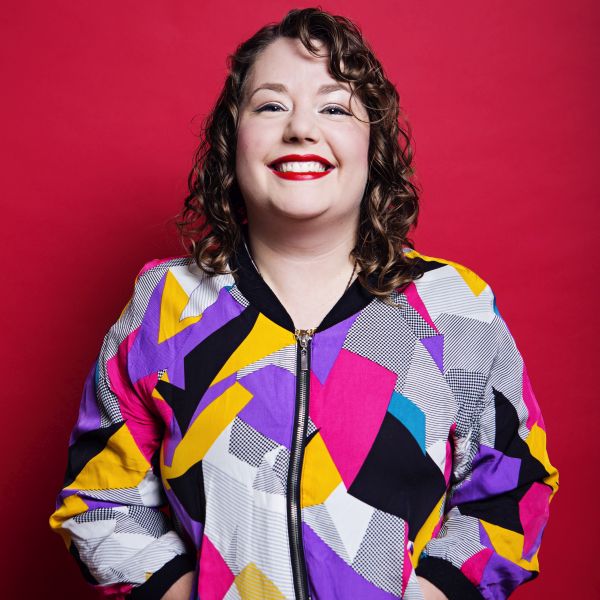