The inmates take over The Asylum! Kirsty Newton co-hosts in a star-studded crazy cabaret.

Hi Kirsty, tell us about The Asylum.

The most exciting new late-night show on the Fringe! All the craziest, funniest, weirdest and most wonderful comedy and cabaret acts have been set free from their shackles to entertain, surprise and enthral you in this immersive and unpredictable brand new themed show, THE ASYLUM. Hosted by myself and the fabulous whirlwind that is Phil Nichol, with a live house band & a different line-up of the hottest acts every night, step into the madness, take your medicine from the nurses and witness the very best of midnight spontaneity, silliness and one-off, unhinged fringe firsts!

Edinburgh literally changed my life. I’ve come every year since 2003, performing with some of the best comedians on the circuit. I met most of my best friends here and all my relationships in the past 20 years have weirdly either started or ended here, around my birthday which is slap-bang in the middle of the Fringe. Luckily, I’ve been married now for 5 years (to comic Nick Doody), but it’s always a relief to get through another year without a major life incident. This year, as well as THE ASYLUM, I’m doing Whose Line Is It Anyway which was my favourite show as a teenager, so a dream come true and also, Arthur Smith Sings Leonard Cohen: The Final Tribute which is one of the best shows I’ve ever done. Basically, Edinburgh is the dog’s bollocks.

The Muppets – it’s how I’ve always lived my life. Always a show to put on full of brilliant characters, fuzzy monsters, jokes and songs.

Accidentally joining a brilliant band on stage after I won a twist competition in Amsterdam whilst on magic mushrooms. We jammed for half an hour and the crowd went wild then I crowd-surfed off the stage. Phil Nichol was there. He usually is for these kinds of things.

Chortle kindly gave me a glowing one for my first solo show last year (‘Life Begins At Party!’) which said I “should be employed by the NHS to raise the spirits, the heart rate and help everyone rediscover their will to live” which was quite nice. Also, apparently, my show blew their socks off, which was the main thing I was aiming for.

Employed by the NHS to help everyone rediscover their will to live.

Night School by Richard Wiseman. My husband bought it for me to try and help with my chronic insomnia. It’s a really interesting and entertaining read but I ended up staying up all night to finish it, slightly defeating the point…

Why are you always late for stuff?

Because I suddenly have to fill in questionnaires!

THE ASYLUM – featuring all the amazing acts we have on here at the Fringe! It would be immense (but probably wouldn’t get past the watchdogs at primetime). 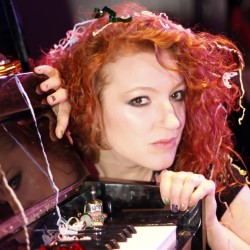