Over 10 years Zoe Lyons has cemented her place as one of the UKs great comics. Martin Walker wonders how her act has changed over the years, what she thinks about the axing of BBC3 and how she came up with the title of her latest show, “Mustard Cutter”.

“My shows are becoming less “themed” I think. I like the idea of being able to just do roughly an hour of funnies, but there is always something external that gets the ball rolling with new material for a show – and this time it was a remark made by a neighbour. She is a dreadful snob and commented that curtain aspects of our property weren’t up to standard and simply “didn’t cut it”. It got me thinking about what it is to be a snob or feel you are better than others somehow. Writing about it is a passive aggressive way of confronting it”.

Television audiences will be used to seeing her on Comedy panel shows, frequently as the only women guest. What does she think about the new BBC policy of ‘no more all male’ panel shows?

“Female comics are definitely under represented on the majority of telly panel shows but I don’t think the answer is to ban all male shows. Neither do I think we should have all female shows to redress the balance. It’s a form of positive discrimination that won’t help anybody. Bookers for these shows have a duty to get out into the circuit and see the girls who are working the comedy clubs every week and doing great stuff”.

Of course once BBC3 is axed, there will be much less comedy on TV overall.

“I understand that viewing habits are changing and more people are accessing shows in different ways but axing BBC3 now just seems completely wrong to me. Why kill something when it is flourishing? The channel has produced some great shows lately and I don’t think they have even considered where I am going to get my post gig Family Guy fix from. Inconsiderate bastards”.

Back on stage, visitors to the Brighton Fringe can catch live monthly comedy night ‘Bent Double’.

Bent Double is a bloody lovely gig that I have been running in my adopted home town of Brighton for almost nine years. The crowd is mostly but not exclusively gay and they are such a fun up for it audience. It’s a really enjoyable gig to play and it makes me very happy when acts tell me it is one of their favourite gigs in the country. I will put on bills that you might not get in other clubs.

Yes, I will be there again this year. It’s taken me years of doing Edinburgh to figure out how to approach it. Basically it is head down, do the shows, have fun, don’t go crazy nuts on whiskey and perhaps throw some exercise into the weekly routine. Also eat an apple every now and again. 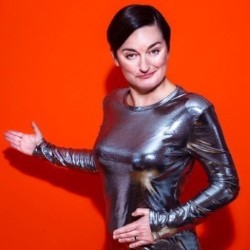