My show is called Cerebral LOLsy. And yes, I did take the rest of the week off work after thinking of that title. The show is basically a look back at my life since I won BGT and all the random stuff that’s happened since. And that includes dancing with Paul from The Chuckle Brothers at the Royal Variety Performance after show (which was definitely a career highlight!)

There are plenty of other stories. People always seem to get my name wrong as well. The main reason that I chose a stage name was, so I would stand out from the crowd of all the other new comedians, when I was just starting out. I thought it would make me more memorable. But you’d be surprised at the many variations of that name that I have called. People have called me all sorts. From no voice boy, to misplaced voice man, to the guy with no voice.

And then, of course, there’s been the trolls on the internet.  For example, one tweet that I received said, “well done on finding the easiest way to do comedy. You can just write stuff on your laptop, and get that to remember it and say it for you.” Of course, he is right. Can you imagine how hard my life would be, if I could actually talk? It just doesn’t bear thinking about. I’d have to remember how to say words, remember how to form sentences, remember all my jokes. Clearly, by choosing to be disabled, I have taken the easy way out. And, for that, I’m truly sorry!

This is the tenth anniversary of your first appearance at the Edinburgh Festival Fringe!

Yes, that’s right. Even before I started doing stand up comedy myself, I’d already made a trip up to the Fringe for quite a few years. It’s just the dream place to be if you’re a comedy fan. So I can remember having my spreadsheet of shows that I wanted to see and running from one venue to the next, so I could fit as many shows in as possible. So, when the chance came to take my own show to the Fringe, it was a no brainer. I’d be following in the footsteps of some of my comedy heroes, and that was a very big deal to me.

I think performing at the Fringe has helped my comedy evolve a great deal. I think I can see the changes when I watch some of my old shows back. I’m definitely a better joke writer than I was, and my jokes are a lot sharper now. I can structure a show a lot better now as well. So the experience has definitely paid off. I’m not sure how much success has changed me though, I’m still the same dark and twisted comedian I was when I first started, I just have more range in terms of different material now.

Tell me about your BBC Radio 4 show, Ability.

Ability is a sitcom about a disabled bloke, who can’t speak, who sometimes uses his disability to his advantage, and can be a bit of a dick at times. So obviously it’s purely fictional! I’m very lucky to be able to work with a great writing team on Ability, both Daniel Audritt, and Kat Butterfield, have been very fun to write with. And they’ve really helped make Ability as good as it is. Anyway, Matt shares a flat with his best mate Jess, who he also fancies, and he has a very dodgy carer, called Bob. Together they get up to quite a lot of mischief. In past episodes, they have decided to become drug dealers just to see if they could get away with it. And set up a robot sex line to make a bit of money from lonely old men. And it’s been great fun to write and record. I’m looking forward to doing more episodes in the future. In fact, we’re in the middle of writing the fourth series right now.

Tell me about your role as an Ambassador for Scope.

Scope is a fantastic charity that helps disabled people every day. Many of us would be lost without it. So it means a lot to me to be an ambassador for them. I think that it’s very important that disabled people get all the help that they can to succeed in life. And by helping Scope get their message across and promoting the charity in general, I hope that I’m doing my bit to help other people who are in a similar situation as myself.

I think the question that I’m sick of being asked the most is definitely, “have you ever tried to talk, just to see what would happen?“

As if I had just been lazy all of my life, and therefore just couldn’t be bothered to talk. Like I was only putting it on to take advantage and jump the queues at Disney World. But, in case you are wondering, no, I haven’t tried to talk before. Mainly because I know nothing would happen. I’m not going to suddenly open my mouth and hear Brian blessed’s voice booming out. Besides, I’ve built a career out of not being able to speak now. I don’t think I should be encouraging my voice to magically reappear too much. The found voice guy just doesn’t have the same ring to it. 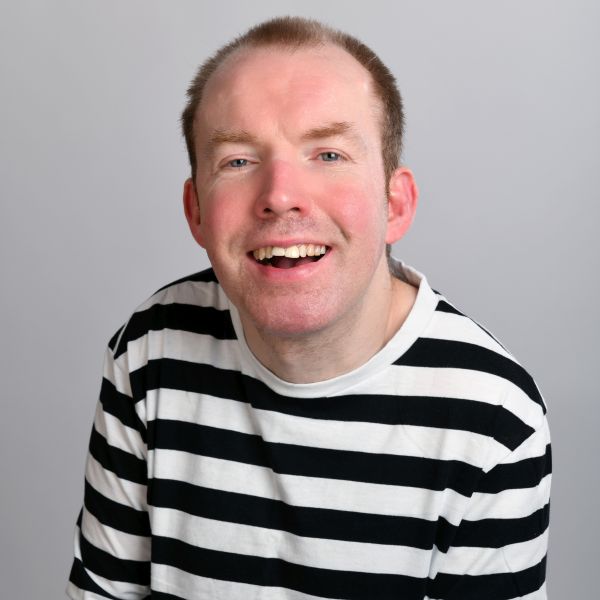