Want to know how to be attractive to women using fruit? How to explain menstruation to a 12 year old? What your last words should be? How to top any ex you’ve ever had to compete with? It’s all here at Luke McGibbon’s Edinburgh Festival Fringe show. Sort of.

“My friends all used it last year and it seemed to really work for them and I am not able to make decisions for myself.”

“I was never really a class clown or that sort of stereotype, but I wanted to do it as a bucket list thing. And then when I had a shitty job in a call centre, writing was definitely an escape.”

“My best experience was performing in a bar I had been working at for several years and was working at the time, the Belfast Empire. At the end of my set I ripped open my jacket to reveal my uniform on underneath, and leapt offstage to get back to work at the bar. I liked that, it was brilliant fun. I think it reminded the audience that most comedians are simply normal people, just louder.

“Worst experience was being put on a bar in Derry where none of the punters actually knew there was a comedy gig on. There wasn’t a stage, pretty much just a raised table, and they turned off the football to put us on. It was more like a gong show, to be honest. I lasted two minutes. The headliner lasted about 30 seconds. Afterwards a helpful punter who was certain that he knew what was funny decided to give us all pointers and tips on the sets that he hadn’t heard us perform. Phew-wee”

“Dylan Moran is my hero. He is just brilliant. He gives the impression that it’s entirely off the cuff. Simon Amstell is great in that he’s found subjects for stand up that normally wouldn’t be approached because they are seen as “downer” like loneliness, lack of direction, the feeling of something being wrong with your life, and managed to talk about them in a style that is as honest and congruent as it is funny. Rufus Hound, while talking about ordinary subject matter, manages to do it in a very intelligent, polished way. I think Greg Davies is brill, firing cheeseballs at a dog really surprised me by being one of my favourite DVDs. I love how much fun you can tell he’s having. Ross Noble Comperes. That’d be a weird as fuck night, wouldn’t it?” 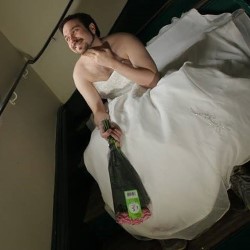