Return to Superglad showcases the stand-up comedy of Ben Clover and Nick Elleray. Ben combines top-notch joke writing and silliness with whip-smart one-liners. Nick, mines his own life for… something else. Martin Walker catches up with Nick by email.

“The show is called Return to Superglad and it’s on the top deck of a bus – omg, random, lol, I know. I’m doing it with the very funny Ben Clover, who is a great joke writer (and teller), we do half-an-hour of stand-up each, with no overarching theme other than ‘funny’. Ben mixes everyday subjects with the absurd and arcane. I talk about personal things, but purely as a means of getting to say something stupid or funny.

“Can I use the word ‘funny’ again? Thanks. FUNNY.”

“To be honest, I thought I would get to meet an actual horse.”

“Well, there are jokes. There are a lot of hey-that’s-a-joke jokes, but also some oh-was-that-a-joke? jokes, as well as some it’s-a-day-later-and-I-now-realise-that-was-a-joke jokes.

“Also: a lot of comics use ‘self-deprecation’, but I’ve moved on and am now using ‘else-deprecation’. You weedy git.”

“No, she doesn’t either.

“My first instinct is: anyone I’m funnier than. Not good for the show, but good for my thirsty, gasping ego.

“My finer instinct would be to select: Tom Ward, who is in top form at the moment and is doing a show with the wonderful Richard Todd – get both of them on; Mr Susie (Mark Davison), a man who makes me laugh just thinking of his face; Maria Bamford, because she’s Maria Bamford; and Sunil Patel, because he owes me nine quid and won’t return my calls.” 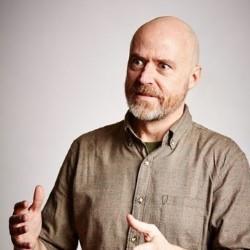