Danny Mcloughlin feels alright. He feels more alright about some things than others but it’s normally the case that other people tend to feel more alright than he does. At this year’s Edinburgh Festival Fringe you can join Danny for an hour of stand-up, where he’ll show that he feels alright and that it’s alright to feel alright.

“It’s called Danny Mcloughlin Feels Alright. It’s about how I’ve grown up with everyone telling me how awesome my dad was and sort of feeling inferior, comparing his life growing up to where mine was growing up/is now, but at the same time realising that sometimes, instead of worrying about who’s better, it’s more important being content with yourself, despite knowing you’re probably only average at something. You can feel alright about only being alright.”

“The people, that and not driving for a month. Being a comic and travelling everywhere is fun but sometimes driving four hours to work and not having time to chat and hang out with mates sucks. At the Fringe, everyone is there, in the same place, with the same common interest and no one needs to rush off to avoid traffic or a diversion on the M6.”

Do you think that the BBC is right to axe BBC3?

“I think that’s a massive can of worms with arguments for and against that probably should be left to more passionate and articulate people than me. There is some excellent stuff including some fresh ideas but some nonsense too. There’s absolutely no doubt that BBC3 has really helped comedy, especially new comics and writers but I don’t need to wait for three old episodes of family guy to finish before I can watch it. Hopefully they can sort something out that continues to help the industry, and new talent in particular.”

Tell us your best, worst experiences as a stand-up.

“It may have actually happened at the same time. In an attempt at being wacky I engineered for myself to get booed off at a festival gig which was really funny – the gig went really well by the way. Some dude launched a can that hit me in the head, which made me sore and giggle at the same time. The worst thing though was that someone had filmed it and put it online out of context so I just looked so shit that some dude decided to throw a can at me.”

You’ve supported Al Pitcher, Micky Flanagan and Sean Lock on tour and appeared on TV with Al Murray, Andy Zaltzman and Richard Herring. If you were curating a stand-up show for television, who would be your guests?

“Probably loads of rubbish to make me look better, and nobody too good looking.

“But if I had to be serious, Alun Cochrane and Carl Donnelly are my two favourite acts. They can talk about things like sheds and crumpets and still make it hilarious. I have a lot of favourites that you may not have seen on any shows that festoon our screens. So acts like Dan Nightingale, Gav Webster and Jeff innocent would all be in with a shout. I’d probs have some new acts on too. Peter Brush, Kiri Pritchard-McLean and Pepper Von-Toose are all excellent comics.” 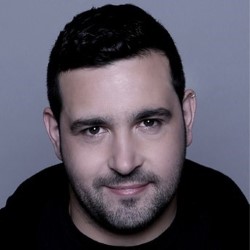