Shelf: Boys is a comedy show where double act Shelf explore gender, sexuality and mental health with sketches, songs and a boyband.

Hi Rachel and Ruby, tell me more about your new show.

Boys is Shelf’s first show to be named, or gendered, and takes an honest approach to gender, sexuality and mental health. A sketch show with only one sketch, Boys often delves too deep into Rachel and Ruby’s personal lives and friends, family and ex-partners have expressed concern. Everyone’s still laughed, though.

Rachel: A month off work!

Ruby: A month of work!

Rachel: Really lame of me, but genuinely probably my mum…

Ruby: My grandmother in America, definitely. But I know Rachel’s mum will kick off if I don’t mention her now, so also Rachel’s mum.

Rachel: Worst- it was still a good show but Bestival is the only time we’ve been heckled. An incredibly drunk bunch of lads watching shouted “Rachel show us your tits.” Although obviously still hugely misogynistic and unpleasant, it was quite refreshing that they targeted the butcher member of the double act! We saw them again after the gig however, and they’d gotten our names mixed up, so that added disappointment to injury.

Ruby: Yeah if you’re gonna sexually harass us we request that you at least be progressive about it. Best gig… there’s loads I’ve really enjoyed. Maybe even our very first gig, where we realised how much fun it could be. And there were some great ones at Bedlam Late Night last year- hopefully the best is yet to come.

Rachel: We had one review in Edinburgh which quoted a sketch that was no longer in the show. We can only assume they read a review of our preview show and literally just copied that. Kind of disappointing that the only bit they thought was worth quoting was a bit we had decided to cut…

Ruby: We also had a review say that we’re from North London. That is a damned lie and don’t let anybody tell you different, we’re from South London.

Rachel: The person that gets the cast all riled up on Ex on the Beach, Love Island and Geordie Shore.

Ruby: That’s just what you do anyway! Rachel’s a reality TV producer. I’m a freelance Script Reader the rest of the time and I love that. I think I’d just travel around more at the same time. Also, if anyone reading this is looking for Script Readers, your pal here is willing, able, and arguably desperate.

Ruby: You didn’t even finish it, and that was 6 months ago.

Rachel: It’s much longer than it looks.

Ruby: I’ve been reading a lot of graphic novels, most recently Fun Home by Alison Bechdel. Because I’m also a literary queer, but I really like pictures.

Are you excited for Edinburgh this year?

We’re so glad you asked. We really are- Boys is our favourite show we’ve ever written and we’re excited to see how it develops during fringe. We always have a lot of fun in Edinburgh and this year we’re kicking things off hosting a stand up mixed bill called The LOL Word with an all queer lineup (The Street, 5.15pm, 6th – 13th August with Chloe Green, Chloe Petts, and Jodie Mitchell). It’s gonna be a blast.

Rachel: Oh my days, not really BBC territory but definitely a queer reality tv show. A bunch of queer women in a house getting drunk, going out and causing trouble, following their #loves #laughs #losses. Every queer woman we know would be involved.

Ruby: God, yes, that. And maybe just a non-reality version of that for the BBC. I think it would have been good for teenage me to see something about queer teenagers that wasn’t just a subplot on Skins. Or desperately sad. I’d love to make a fun show for gay kids. 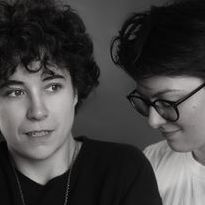