he Comedy Store King Gong winner and Comedy Cafe New Act winner David Jesudason, explains to Martin Walker why his dad says things like: ‘Now that we own Afghanistan why can’t we get them in the Commonwealth Games? They’d be good at the shooting events’.

“Things My Dad Says is about my father and how his relationship with me has led to numerous comic situations. He has a bafflingly odd way of looking at the world and says things like: ‘Why do people sniff glue? Must be a very expensive habit as it ruins loads of banknotes.’ It’s not just silly stuff though as I discuss what it was like to grow up as the only Asian boy in a small town and how that’s coloured my viewpoint. My Dad has made a huge change in his life recently and we’ve grown apart. That doesn’t sound funny but the material has won awards! It’s a very personal show with a lot of truth.”

“Laughing Horse are a joy to deal with and really support new comedy. They understand how to put on a professional show and are totally committed to grassroots comedy. Without them a lot of acts would not be able to perform at the greatest comedy festival in the world.”

“I wrote comedy for radio and attempted to write comedy for TV. It was frustrating having to wait ages for your work to be seen and it often was edited or dropped at the last minute. Stand-up gives you total creative freedom and you’re a master of your destiny. It’s not easy but is very rewarding. It’s been the hardest but most fulfilling four years of my life.

“I learned that I had to work hard to be funny and cut out anything that involved stereotypes such as Asians being suicide bombers and write about what I know and care about. When you get it wrong you at least know how to get it right later.”

“My best experience was winning the Comedy Store’s King Gong competition. The show is renowned for the heckling the audience throws at the acts. I’m not sure if I was lucky or just on top form but when you watch the video the audience loved everything and the hecklers were silenced. I knew after 30 seconds that this gig would work out well. Things then slowed down and I could make loads of good decisions. It’s a remarkable feeling. A bit like in cricket when an inform batsman can see the red ball like a football.

“My worst experience was when I did a gig in Kent and the promoter before a gig asked me if I did ‘racist material’ I said no he then asked if I talked about my ‘brown skin’. I grudgingly said ‘yes’ and then he said ‘that’s racism’. I still am angry about this today as I interpreted those words to mean that old-school comedy has been replaced by ethnic acts doing the same jokes. That’s so far from the truth. I was a bit naive that day and went on stage as a timid version of myself.

It would be amazing to have a stand-up show that wasn’t reliant on agents. Imagine a show of new acts that were actual new acts? It probably would be eye-openingly rubbish but at least the title would be true. Maybe the presenter could be that Kent promoter. 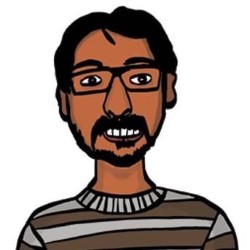