Rhys Nicholson returns to the Edinburgh Festival Fringe with a new show, new suits and an inflatable llama.

Tell us about your show.

“Wow straight into the questions. Not even a hello. It’s been like a year since we spoke and this is how you greet me? Jeez.

“My show Eurgh is essentially 55 minutes of me recounting heinous things I’ve done and bad choices I’ve made. It also features an inflatable Llama… and confetti… and a live tiger… ok I lied, there is no confetti. What else could you want? Blood? Do you want blood from me?”

You’ve been described as Australia’s besuited degenerate. Is that fair?

“It isn’t fair, but it’s true. I like to think of myself as a friendly proprietor of filth and filth products. Think of me as a local black smith, but instead of metal and fire, I use dick jokes and an almost constant flow of references to ejaculate. Pardon the pun.”

Last year you were at the Edinburgh Fringe and since then you’ve played the Adelaide Fringe, Melbourne, Sydney, Brisbane and Perth Comedy Festivals. To the audiences reactions differ? If so how?

“Stop measuring it. Just get better with your mouth.”

“Talking Heads, Angela Lansbury, a tank of live sharks and the The Morman Tabernacle Choir.” 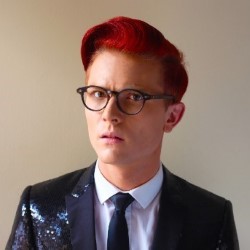