Do you recognise Tom Stade? You should, he’s been on every major stand-up TV show in the UK… Live at the Apollo, Michael McIntyreʼs Comedy Roadshow, Stand-Up for the Week… he was also the co-writer and co-star of Frankie Boyleʼs Channel 4 series Tramadol Nights. Martin Walker gives him a call.

Hi Commander Stade, how are you?

“Commander Stade, yeah that’s my Twitter handle man. I just bought a house, and it’s a bunker, I can’t get any phone signal… I’ve got to step outside, hello? Are you still there? Ok, good, so now I’ve got coffee and a cigarette and I’m good to go.”

The calm before the Edinburgh Fringe storm?

“Ah, darn, holy shit, yeah. I think this will me my seventh Fringe now.

“My first was in 2006. I did three in a row and then I skipped a couple of years, then I came back. I kind of got a taste for it the first time, walked away from it, licked my wounds and came back with a bit of stronger armour.”

So what’s this year’s show about?

“It’s called Decisions Decisions. I’m really proud of this one. Because you know what, I’m more of stand-up than anything. For the most part I sit about on Monday mornings and write jokes, and every joke seems to lead to the next joke. I’m starting off with toothpaste and ending up sky diving and you wonder how they’re connected and I tell you why – I stumbled on every single one of them

“So I guess the show is about me telling jokes.”

You hail from Canada originally.

“Yeah, I worked a lot in Canada. I’ve been up and down that country a few times, from Newfoundland right to Vancouver City. There is only one circus there but if you’re in it you will travel. You can only go so far in Canada…

“Most of my life is an accident. A proper accident. I went to the States and had my moment there and that was fun, and when I came here things fell into place. I mean when God laughs at your plans… that is true for me, I’m not religious or anything but the universe…

“That’s where am at right now. I’m not planning anything. I’ve tried to plan so many times before and its left me broke so fuck it.”

But you are a success surely?

“Yeah, I don’t know what success is. That’s up to whoever’s looking at us. I didn’t go down when Jongleurs left so I guess I’m doing OK.”

You worked with Frankie Boyle.

“Oh, yeah and it’s so funny when people talk about that stuff. They would have never said that ten years ago, but because he is famous it’s a thing. The fame thing gives more kudos. It’s a real luck shot who gets famous and there’s a very large talent pool out there. So many brilliant people never get famous.

“It’s all a game out there, the older I get the more honest I get about it. There are people in charge of Channel 4 or the BBC or whatever and you have to get along with those folks man. You gotta watch your step. If there is something you did ten years ago and they can’t forget that, you can’t get in the door.

“I mean my wife, at least she lets me change. She said ‘you’re not the same man I married’ and I said ‘Jeez, I hope not.’ I need to shed my skin every now and then to become the person I’m supposed to be. I’m like Jesus resurrected, I come back two days later as the new Tom.”

Not everyone liked Tramadol Nights did they?

“It was something, when you do a show like that, when you set out to try and change the rules about what is funny and what isn’t funny… you’re always going to have that opposition. So now everybody agrees, let’s get rid of politically correctness and all that, but it’s hard for people to change.

“People fear change. If you have a nice little family going the last thing you want to do is watch Tramadol Nights and turn your world upside down, you’d rather watch Phoenix Nights.

“And then Jordan turned up and like fucked it up, like, completely fucked it up. I never thought a woman would get to in my life and go ‘fuck you’ like that. ‘Jesus Christ, could you just stay out of this, you put your tits out there for fucks sake. How did you destroy something beautiful with your tits?’”

Hang on, you can argue that Katie Price is fair game. But her disabled kid?

“This is what I say to that. ‘I understand that, because you’re a mum. And I understand that, because I’ve got two kids, but you are also a famous mum, and you chose to put your kids out there. You know people like Tom Cruise, don’t even know what his children’s names are, you know what I mean? And a lot of famous people would never put their child into the circus frenzy that is show business, and once you do… that it is open for criticism, and once you do… you’ve got people that will say something about it.’

“And you know the funny thing is Martin, I don’t think Frankie put any thought into it, I don’t think he thought, you know, ‘how can I fuck up Harvey?’ I can’t speak for him so I don’t want to say too much, but this is what I think anyways, you know what I mean.”

I’m a fan of Frankie’s, but even I thought he crossed the line that time. It seemed like he was trying too hard to shock. ‘Look at me being politically incorrect!’

“But you are really attacking free speech by using terms like politically incorrect. You know when you turn on the news and you look at the horrid shit that goes on and …comedy is just a commentary on these things, comedy should not be attacked.”

So comedy is a mirror. The reflector, not the director?

“Well there you’ve nailed it. But the most important thing is that it’s funny. If you don’ think the Jordon joke was funny than that’s fine, but understand that for a comedian that’s actually a harsher criticism than a joke being deemed offensive.

“So you can joke about misogyny and homophobia, blah, blah, blah, but, if those jokes are done the right way they are funny, but they would still be considered politically incorrect. The craft of comedy should let you sail through those moments to get through the other end.

“Everybody kind of knows what’s right and what’s wrong and it really does depend on whose saying it. I can’t remember who that idiot UKIP guy is, but if he’s commenting on immigration and race people are like, ‘whatever, I don’t want to worry about this guy.’ But if Frankie’s saying it like a thing. Come on, man, really. Who is the most dangerous?”

Do you ever watch yourself perform?

“Always, that’s one of my biggest tools. I stumbled on it when I was doing that last Edinburgh show. I had to get a show done quickly so I started videotaping my previews, I could direct myself more easily. Most comedians don’t like to watch themselves because the decisions they take in their head may not match what is going on screen. As soon as I started actually watching myself I started noticing my decisions, ‘why did you chicken out?’ and ‘why did you end that joke when you know fine well what you were going to say there?’

“It was a really weird experience, but now I totally tape every show now.”

So who would appear on the Tom Stade Comedy Roadshow?

“Definitely Patrice O’Neil, early George Carlin, not later, I don’t like later, I think he lost his playfulness and Richard Pryer. Then I’d go for Jason Cook, who I think is fabulous. I would take Danny Sloss, Greg Campbell and Josh Howie.”

Would you take Frankie?

“No Frankie is already famous, he can have his own roadshow. I was on the Michael McIntyre one. That was the one that took me over the scales man, I love Michael, I like them all man.

“Scott Cupurro would get a shot. Of course I know Scott, I like Scott a lot, I think he’s a good dude, and very funny. When you’re gay the last thing you want to be is conservative. And he aint.” 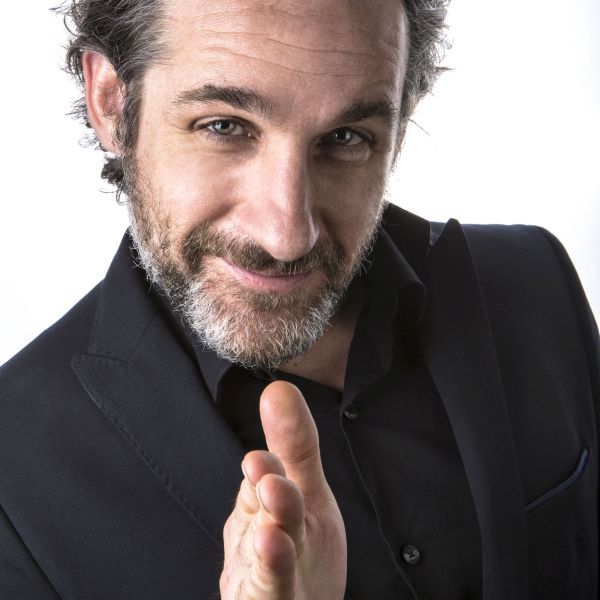