The charming Rik Carranza returns to the Edinburgh Festival Fringe after a successful 2013. Martin Walker chatted to Rik via email about his show, and he explains why his comedy is like a world cuisine all you can eat buffet.

“I frequently get described as ‘charming’. During last year’s Fringe it was from a Broadway Baby review ‘charming MC’ and a column from Kate Copstick ‘charming musician’. This got me thinking, am I charming or ‘charming’. Am I the good charming or am I the bad charming. In my show I’ll be using the charmometer 3000 to test out my material to work out which I am.”

“The Laughing Horse were the first ones to give a spot for a fringe show in 2010 and since then they’ve always been very supportive.”

“Like an all you can eat buffet. One of those world cuisine ones. I play guitar, have silly drawings, tell stories, one liners and play games, just generally try to have as much fun as possible.”

“The one redeeming thing about the Blue Brothers 2000 was the closing scene with some of the greatest blues musicians playing together. I’d love to do the same thing but with comedy musicians. I’d have Mitch Benn, Bill Bailey, Stephen Lynch, Tenacious D, Axis of Awesome, Tim Minchin, Garfunkel and Oates, and Flight of the Conchords” 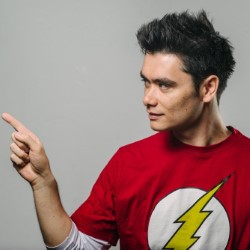