Prophet Like It’s Hot is a show about society’s relationship with faith and, in particular, it’s understanding of the Qur’An. I take a copy of the Qur’An on stage, demystify some myths people have about Islam, talk about some of the unsurprisingly ridiculous bits of it (given it’s a 7th century AND religious text) and explore whether there’s a place for faith in modern society.

It was an open mic gig in the basement of a pub in Liverpool Street (London) called Dirty Dicks. I absolutely crushed, which is why I am where I am today.

I don’t believe in rituals which is why I don’t believe religion. I just believe in working hard, taking my hearing aid out 5-10 minutes before a show starts to enjoy the silence, going out and crushing gigs and all the trappings that come my way as a direct result of my hard smash.

I don’t read reviews because I respect the opinion of very few people in this industry, but just know that a website, whose name is a synonym for chuckle, gave me a 2.5 star review and that was 0.5 stars less than it gave Bill Burr – so it looks like I know what I am doing and why I have and will continue to smash.

No, I don’t. The only review I need is my own. Which is always smash.

Ambivalent. All I care about is smashing. If reviewers don’t like my show, they should write a show themselves and perform a smash of their own.

No, I don’t think he did. Comedy audiences have a great way of filtering what they think is funny or isn’t – that’s called laughter. And for online, it’s called sharing. People don’t share what is not funny and if people share what is racist, they’re very much in the minority. A dog doing a Nazi salute in response to a phrase generally regarded as offensive, is more ridiculous than it is offensive. It is definitely NOT a smash.

The only topic I can think of is Grenfell. Other than that, everything and everyone is ripe for smashing.

With a smash, yes. Too hard. In terms of topics, probably, but offence is taken, not given. It’s up to them if they want to write a strongly worded blog or twitter thread about my hard smash. I’m not reading. I’m too busy reaping the rewards of my smash.

Performing at The Palladium for a BGT audition, smashing, picking up four yes’s and a standing ovation from David Walliams before Amanda Holden told me I am too clever for a BGT audience. That is a hard smash. Smashing. 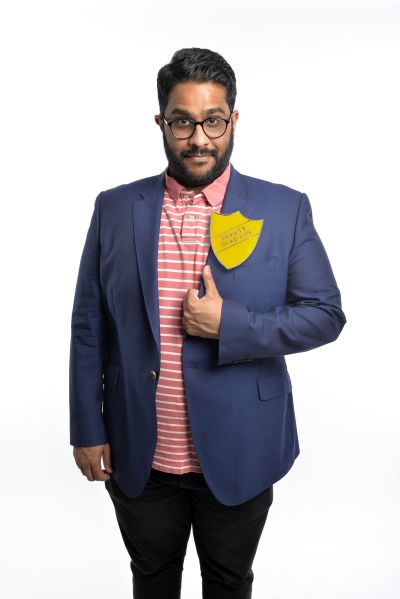