It’s a character show and a kind of illustrated adventure which I present as the great David Attenborough. He recounts the tale of his first adventure using visual slides recordings and different accents. It’s a really silly fun show that hopefully does some justice to the great man, or at least doesn’t enrage his lawyers.

It’s my favourite month. I’m surrounded by funny and talented people all working to the very top of their abilities. It’s Disneyland for comedy. But the performers are probably worse paid than at Disneyland. Is that OK to say? Or am I just enraging even more lawyers?

I’m always inspired by cool nerdy storytellers like Simon Pegg and Joss Whedon. In terms of performance Steve Coogan is a huge inspiration along with Kate McKinnon from SNL whose characters are always brilliant. And David Attenborough for obvious reasons.

Worst: At secondary school, I was in a show where I was asked to perform a Monty Python sketch. Only it turned out one of the Pythons would actually be in the audience. It went as well as could be expected.

“Tom Neenan wasn’t funny” Durham Palatinate 2006… Um at least I think that’s what it said…. I can barely even remember to be honest… Yeah…. Barely at all.

Well half of my time I spend writing so I would probably just be a writer who doesn’t miss deadlines because he was at a preview the night before.

The First Bad Man by Miranda July. Took me a while to get around to it but I thought it was terrific.

What’s the last film you saw?

Get Out. It was so good.

I’m fortunate enough to be working on a BBC primetime show this month with long time comedy husband and Great Friend™ Nish Kumar. It also stars Rachel Parris, Ellie Taylor, Andrew Hunter-Murray and many more, so all in all it’s a pretty dreamy team. 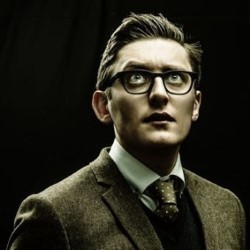