It’s a comedy lecture about two things: (a) what the top individual actions are on climate change i.e. how you can most make a difference, and (b) why most of us don’t do them i.e. the psychology of climate change. It’s both informative and full of lots of jokes and jokettes.

It was in 2009 after a comedy course in Glasgow. I was the only person to get heckled on the night and I’m the only person who is still doing comedy. Make of that what you will.

I listen to the band Shinedown on repeat in my pants while ironing a shirt. This is normally about 45 mins before I go on stage.

The thing is, if I mention these then other comedians will go looking for them. Both of them are from The List in consecutive years. Although I should give special mention to Fest Magazine for consistently not enjoying my work so much that they come back every year and get some other aspect wrong, ad infinitum.

No. I will afterwards. But someone will mention something. They always do. “Can’t believe you only got 3 stars in such and such” …“Thanks but I have no idea what you’re talking about” ad infinitum.

Most are very nice people and good at their job (which is even less of a job than being a comedian). Although I do think its true that most wish they could be comedians. And like comedians there’s always one who has confusingly got as far as they have despite being terrible.

I like that you’ve called him a ‘YouTube comedian’ which is the best insult. I believe the guy is clearly a tool who is hiding behind ‘comedy’ to say horrible things and has no idea of what comedy is or involves. Although, I think the question you’re asking is whether I believe the law is correct? To which my answer is no, I don’t really, because free speech is clearly such an important right, and in this instance by being so severe, I feel it has played into the hands of the far right. However, if not, and you actually want my legal opinion on whether he committed a criminal offence then you’ll have to pay me, I have a law degree. Also, I’m annoyed that you’ve made me look this guy up on the internet which is what he wants. The world is a stupid place right now.

No. Only people who are not suitable for comedy.

It’s summer 1993 and I’m about to do my first 6 and a third spot at The Comedy Locker. It’s their famous New Shoe Night on the last Wednesday of every third Tuesday. Backstage I’m pacing backwards and forwards nervously, holding my lucky beer glass in hand that my dead father gave me, like an ant carrying the weight of an entire career and family history on his own shoulders and who’s lost backstage at a comedy gig. It’s potentially my big break, the producer from the Get Some Laughs Festival is in as well as the producer from Big Break, I’m so nervous. I step outside and who walks past but Duck Edwards. He’s the reason I got into comedy. I watched The Duck Edwards Show growing up every Friday night for 28 years after my father passed. I’d race back from school just so I could make my hot chocolate and marshmallows before it started. I go up to Duck and introduce myself. “Hey kid” he says in that drawl Norwich accent of his “You up next?”. “I sure am, any advice?”. He proceeds to go on a racist rant about Peruvians for about 5 minutes before saying I should just “Go up, and keep going up” as he takes my beer off me and pushes me on stage. I go up and bomb massively after repeating something about Peru I’d heard a minute ago to a room full of Peruvians and as I come off he says “what goes up, must come down” and drops the beer glass my father made me to the floor and it smashes to a million pieces. Duck laughed to himself like a hyena that’s inhaled one of those balloons idiots have on holiday in Kavos.

Fast forward 15 years and I’m playing the Plaza Bowl on tour in Santa Gusta in front of 15,000 fans. I ask the local promoter for a local act to open for me. As the act goes on stage I suddenly realise its Duck Edwards who is opening for me, the guy looks a hundred years older and is apparently living in a trailer. I go on stage and storm it, and as I come off I walk past Duck and say “Go on up, come on down” and walk away. Best gig of my career. Later it turned out it was a different Duck Edwards.

The moral of the story is the comedy industry is a nonsense. Let that be a lesson to you. 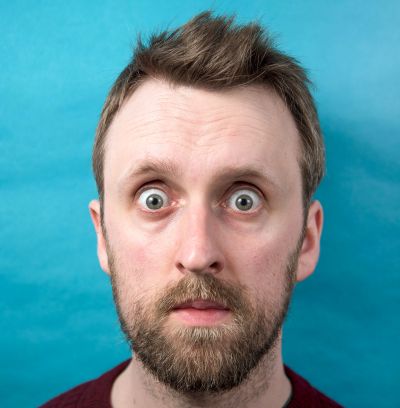