According to his website, Sol Bernstein escaped the Pogroms in Russia and the Nazis in Germany, and then went on to become the World’s First all-round entertainer. He’s a song and dance man, a comedian, a magician, an actor, and a jazz musician. Martin Walker tries to ask him about his Edinburgh Fringe show Still Standing.

“What’s to tell? It’s a show about me and the fact that I’m still standing. At my age it’s not easy to stand for an hour every night. Obviously there’ll be some thoughts, opinions, advice; I might even throw in some jokes.”

How many Fringe shows is that now? What’s the attraction of Edinburgh?

“It’s my forth show in Edinburgh. I love the City. It’s a great City to walk in. Also I love the fact that there are so many performers in one place at one time. The camaraderie is wonderful. It’s also a marvellous thing to see performers you don’t like getting bad reviews!”

“You should know that Show People always lie about their age, I’m actually much older.”

Er, you were born in Ukraine. How do you feel about what’s happening there now?

If you were curating a stand-up/music show for TV – who would be your guests?

“Harry Hill, Rich Hall, Al Murray, Aretha Franklin, Steely Dan and if I could only get him back Ray Charles.” 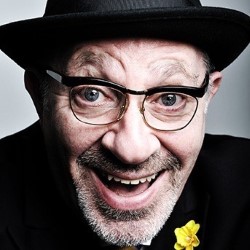