According to his website, Chris Turner’s sharply written gags, assured stage presence and blisteringly quick improvised raps have established him as one of the best up-and-coming comics on the international circuit, performing in the UK, USA, Australia and India. He tells Martin Walker about his widely anticipated debut solo show at the Edinburgh Festival Fringe, Pretty Fly.

“I summarise it as ‘Archaeologist digs hip-hop’, but not a jot of knowledge relating to either topic is required. It’s got a bit of everything, including jokes that even I don’t fully understand; puns and some quite nice storytelling, all wrapped up at the end with a skinny white boy spitting a hopefully jaw-dropping, at the least, mandibular muscle exercising – freestyle.”

This is your debut solo year at the Edinburgh Fringe. At how many Fringes did you perform as part of a company and how do the preparations differ?

“I’ve done five full runs before this, but it’s always been improvised – I’m still performing improv every morning in Aaaand Now For Something Completely Improvised – so I’ve actually had to write stuff this time, which simultaneously lessens and increases the pressure. I’ve been doing a lot of previews too, which you don’t really need to do with improv, so it’s been extremely interesting and fun to mould an hour of material over the last 6 months or so and watch it evolve.”

When did you first learn to rap?

“I’ve been into hip-hop since I was 12, and always rapped along to the tracks, making up my own lyrics. A couple of years ago I was doing a kids’ show where I improvised songs for them, and it always got such a huge response that I started doing it in my normal shows.”

“People really enjoy seeing a rap made just for them, about topics they’ve suggested and most likely assume are impossible or improbable for a rap to ever be about. My favourite suggestion, when I took this show to Australia, was “9th Century Crop Rotation”. A beautiful blend of history and pedology ensued.”

You’ve performed for Jose Mourinho and the Chelsea Players. How did that go? Did you meet the Special One?

It was a great show to do, albeit a slightly strange atmosphere — they’d just come third in the league, which Jose was obviously unhappy about, so he sat stony-faced through the whole show. Eden Hazard starting dancing along to one of my freestyles, and Cole, Lampard and Terry were all very complimentary afterwards. It was really fun to have six hundred people watching me, and despite the fact that there were all these tables of incredibly famous footballers, for twenty minutes I was the ‘celebrity’.

I’d have an extremely varied showcase of my favourites – Daniel Kitson hosting, Hans Teeuwen, John Mulaney, Mike Birbiglia and Louis CK, then end with a freestyle battle where I take on Wu-Tang. I’m not sure it’d get past the commissioners. 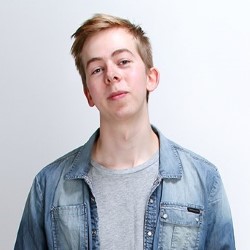