1. How did the Free Festival get started in Edinburgh?

Myself and my fellow Laughing Horse promoter at the time, Kevin McCarron, wanted to put on a show in Edinburgh to promote our comedy club Laughing Horse, much like everyone else, so we went up and looked at options – and we were horrified at the costs and the, essentially impossible task of even covering these. I can remember the morning working it all out over breakfast at the Travelodge on St Mary’s street to this day! So we put plans on a backburner for a while until we saw a free show in action, there was only one back in 2002 or so, and when the opportunity to came up to try it out, we thought we’d give it a go. This first year in 2004 (three and a bit shows) seemed to prove the idea, so the following year we got more acts we knew from our comedy gigs involved (about 15 shows if I recall correctly) to see how it would fare, and It worked well enough to keep going, and expand from there.

2. How does the concept work in practice?

It’s a concept I feel benefits everyone, with the public being able to see many more performances, performers getting a better deal, year-round Edinburgh venues getting more people in the door.
For Audiences, before the free shows grew ticket prices had rocketed up, and people could only afford to see maybe one or two shows, now they can get out and see as much as they like giving the performer what they see fit. As a side-effect paid venues have had to become more competitive, offering lower ticket prices and better deals for audiences, with also the pay-what-you want model being born from our free shows.
For performers, they save the huge cost of venue rental, the paid venues tend to operate on a door split but with a guarantee to the venue running into the several £1,000s, and with all of the other costs and add-ons it is somewhere between hugely-difficult and impossible for a performer to recoup this, certainly outside the top percentage of well-known names and award winners. The performers pay us £100 each towards our costs, get a fully-working venue with mics and lights and so on, and then take all of the collection at the end.

3. How did the paid fringe get so expensive?

In some part the owners of the buildings that many of the larger paid venues rent have a lot to answer for, with high rents and deals in many cases not in the favour of the promoter, but then the promoters themselves no doubt saw it as an easy low-risk or risk-free way of doing business (after all, with performers guarantees they know exactly what their minimum income is). Certainly up until the early 2000s, there was no real competitor to the model, so they could keep escalating costs, after all of the risk was on the part of the performers not the venues. And particularly for stand-ups all the rooms are kitted out to cope with huge productions, so the stand-ups end up subsidising all the equipment used by theatre shows and so on. Add to that the industry that built around it – you must have PR to get noticed! You must by more and bugger adverts! You must spend more on PR teams! No, you don’t.

4. When did you first discover that you’re Ivor Dembina’s twin brother?

Only recently did Nik Coppin discover myself and Ivor were separated at birth. In fact, for only after many years did I discover my ‘inner Ivor’ after shedding a couple of hundred pounds to reveal him! Though I’m much lighter on my feet now, I do seem to have developed the tendency to re-emphasize everything I say, and tell Old Jewish Jokes.

5. Shout out to the people who help out.

Craig Shaynak gets the biggest shout out, for putting together the database system together that runs everything behind the scenes, without which this would literally be impossible. The fact he does this between parts in Hollywood movies and living in LA only shows his commitment to all things free in Edinburghian, especially as he was paid in Steak!
Ian Fox gets a big shout out too for being the testing ground for many ideas, and also pulling a lot of the design work together including corralling our chicken mascot, the listings brochure and so on.
And so many others over the years who’ve helped get things running, support it, or just help with idea and keeping things sane, Nik Coppin, Mike Belgrave, Mike Manera, Rob Coleman, Lydia Mason, Robyn Perkins, Linsay Watts, Dave Chawner, Andrew Roper, Lewis Bryan, Kevin McCarron and probably so many more should get a mention, sorry to those missed! And of course, every single performer and venue manager or staff member who are part of the team every year.

6. You travel the world promoting comedy festivals most of the year. What do you do to take time off?

Beaches feature a lot in relaxing outside of festivals, and that’s also what is handy about the Australian festivals and Brighton. Though I’m a fan of Portobello in Edinburgh too, there’s less sun lounging in Scotland! I like to travel and around work trips I’ve spent a bit of time in Asia, and also around Europe and a bit of the US.

7. In April 2018, YouTube comedian, Markus Meechan (aka Count Dankula) was fined £800 for training his girlfriend’s pug dog to do a Nazi salute with its paw, in response to the phrase ‘Gas the Jews’. Do you believe Meechan committed a criminal offence, and why?

This was one of those stories I missed at the time and have played catch-up, I was at the Australian Festivals and the news didn’t really get that far. It’s clearly set-up and explained in the video of why he’s doing it, to wind up his girlfriend with the cute dog, and a joke. And it’s funny, a cute dog responding to such a horrible phrase. Look at it’s little paws! Clearly the joke could be called very much bad taste, but that’s no crime. Maybe he’s guilty of being a bit of an idiot not realising how some people could take it? As he’s been convicted, maybe maybe Frank Sanazi is in line for a court visit next? But I think a conviction is the start of a slippery slope. Castigate him for being in bad taste or being misguided in what he’s done, but don’t criminalise him. The dog is very well trained, though. Crufts entrant?

8. Are there any subjects that are not suitable for comedy?

I think any subject; as long as it’s approached in the right way can be covered. Punch up, not down! Some of the best shows I’ve seen have covered subjects including death, alcoholism, assault and mental health, cancer. Any subject can be humorously approached I think, as long as oppressors are attacked not victims.

9. Have any of your comedians ever gone too far? What happened?

We had a show; about 7 or 8 years ago, I have forgotten the performers name now, that was a sort of a shock you-Tube video presenter, with videos on various contentious subjects , conspiracy theories etc (back before everyone started doing those). It seemed an interesting thing to put in late night, but he just couldn’t handle people turning up who’d seen him, and taking him to task on the matter. It had to end for his own safety as there were threats of violence!

10. Looking back over your time as a promoter, tell me about the night everything went right.

I’m still waiting for this. Maybe in the next 20 years! Isn’t that the promoter’s job, just making it appear to everyone else that it’s all going OK? We did have a run of shows in Perth (Fringe World) in 2017; the perfect venue called ‘The Gold Digger’ creating the best atmosphere for comedy of any venue I or any of the acts had seen; roof blown of every night; every laugh bigger and louder than anyone had had before; sold out each show of the run; but still we had the odd tech problem or hitch around it, an act getting lost on the way. Maybe I’m too much of a perfectionist, but I think that was as near perfection as It’s ever likely to get! 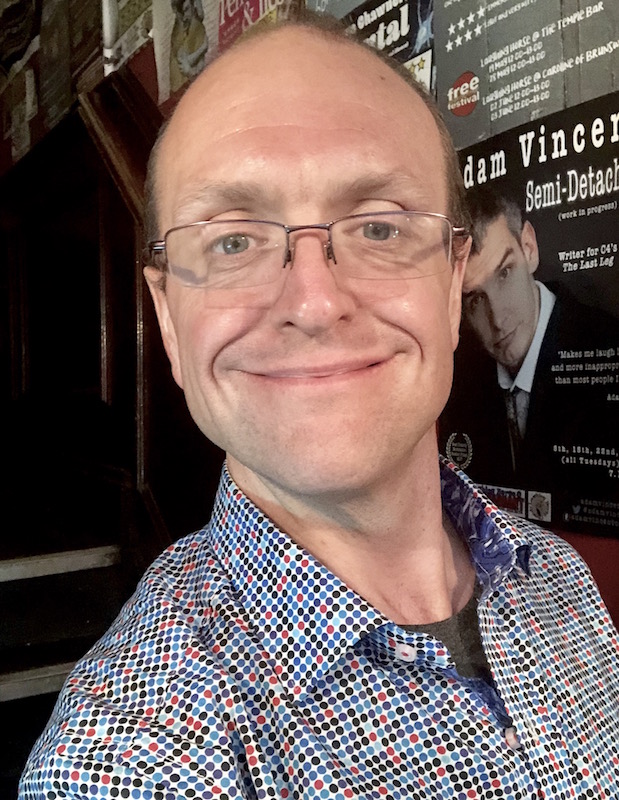