BC:AD (Before Children, After Diapers) is a standup comedy show and one mad, brown, mommy’s take on how the definitions of words change before and during motherhood. This show is an invitation to anyone that finds themselves slightly overdrawn, mostly obscure and definitely needing the sound of another voice to reason with their own challenges – be it parenting, identity or the infinite void between where we find ourselves and where we see ourselves in our daytime dreams.

In an hour, Anu will describe in excruciating, exhilarating, enema-inducing detail the trials and triumphs of being an immigrant wearing one too many hats. BC:AD is a comic take on the disasters of multi-tasking at any cost, no matter what the Wall Street Journal says women are good for. Through a number of stories from before she had children and after she changed loads of diapers, survived the institution called marriage and then found herself amidst two short roommates who insist on calling her ‘mom’, Anu paints a peripatetic picture of the life and times of a comedian, filmmaker and sometime engineer who loves endurance sports, including parenting.

From the equatorial latitudes of Madras, India to the glacial confines of Munich, Germany, the throughline of BC:AD is anything but a line. It resembles a cooked thread of sphagetti or string cheese past it’s due date with enough twists and turns to make the most ambitious wedgie, jealous. If before children, Anu was considered unique for being one of few brown women to race triathlons, after diapers she finds herself a load of freedom in being the least common multiple. A mom. And that might be something to write home about.

I think the attraction is just the opportunity to answer a writing deadline that is fixed and long adorn with my debut hour is an added challenge. I’m from sunny south India and I’ve been told that it’s sweltering in Scotland. Since my alter-ego is a rather large tropical water buffalo, I feel I’m going to be right at home. Having never been to Scotland ever in my life, Edinburgh sounds exotic.

Why should you spend money and buy a ticket to BC:AD?

Because it’s a rare occasion to watch a show about marriage, motherhood and meddlesome monkeys written and performed by a motor mouth from Madras. 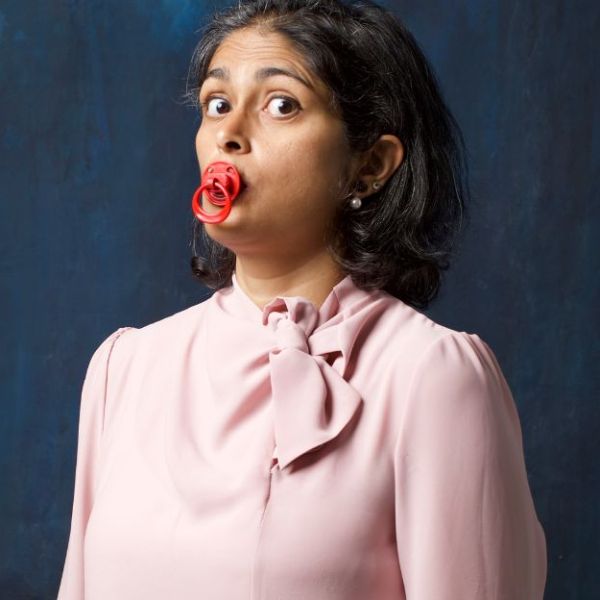