In his decade on the British stand-up circuit, Caimh McDonnell has firmly established himself as the white-haired Irishman whose name nobody can pronounce. When not performing stand-up, Caimh writes for TV and creates BAFTA nominated children’s shows. Martin Walker asks about his latest foray in to the Edinburgh Fringe.

“My show is called Southbound and Down and it’s about what happened when my girlfriend and I moved down to London. Spoiler alert – it went really badly. We had a terrible year but on the upside, it made this by far and away the easiest show I’ve ever written. I literally have to find a way of cutting a couple of hours down to 55 minutes.”

How did you get into comedy?

“I always wanted to try it and so I managed to engineer a 6 month placement in London from my job in Dublin back in 2000. I wanted to do it where absolutely nobody knew me. After 6 months, I went home and resigned – I was hooked.”

“Reaction? Laughter! I think it is a very patronising attitude to think you can change an audience’s mind through jokes. I find a comic banging on about religion as if they’re being revolutionary for taking a pop at it really annoying, you’re almost entirely preaching to the converted. If you want to come out in favour of religion – that’d at least be interesting.

“In short – if you learn any great life lessons from my show, have a long hard look at yourself.”

You’re now based in Manchester, why did you choose the city?

“I love Manchester, it reminds me of the Dublin I grew up in before all that Celtic Tiger nonsense happened. It has vibrant comedy, music and theatre scenes. It also has the highest concentration of comedians living there than anywhere in the country. Sure, there’s more in total in London but I typically bump into a comic once a week walking around Manchester. It’s like the rats in London, you’re never more than twelve feet away from one.”

“For all the exposure stand-up has had on TV, it shocks me how certain acts have been over-looked – hopefully temporarily. If I was putting together a diverse and interesting bill of acts I’ve not seen on TV – I’d go with:

“Michael J Dolan – Never has misery been so entertaining.

“Sean Collins – the natural successor to Dave Allen isn’t Irish, he is Canadian.

“To MC it all I’d have Scotland’s own Joe Heenan – effortlessly funny and he knows a lot about trams.” 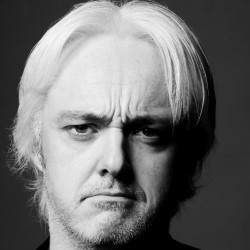