Hi Christopher. Please tell me about your 2022 Edinburgh Festival Fringe show, Oh No!

Oh No is a show about going mental, peeing myself, crying in Morrisons, learning to cook, finding self-worth, and pasta. It’s my third full fringe hour, written partly in lockdown and then worked up in the post-apocalypse. I’m really excited to share it with people.

I think, Oh No! is my favourite show title of the entire Fringe, possibly ever. When you are going through personal issues, is there a part of you at the time that thinks, in the back of your mind, ‘what’s happening to me is awful, but I might get some material out of it’?

Thanks very much! I chose Oh No because it’s really the only proper response to the end of the world. And definitely, yeah, you do have a strange relationship to tragic events, because you know enough time is going to pass that it’ll be funny at some point. There’s a lot of gallows humour in this show with regards to death and grief.

Scotland, especially Glasgow, consistently produces some of the world’s very best stand up comedians. Why do you think that is?

Yeah, I think Glasgow does tend to produce very good stand-ups, from legends like Frankie and Kev, to people who guided me when I started like Susie McCabe and Scott Agnew, to my peers like Rosco Mcclelland and Stephen Buchanan and Marc Jennings, as well as many more that I’ll kick myself later for not mentioning. I think Glasgow produces top-shelf artists in general, with world-beating bands like Belle and Sebastian and renaissance men like Alasdair Gray. It’s a hard place, so you develop a sense of humour as a self-defense mechanism, and your creativity develops when your imagination is the only escape from the day-to-day drudge. Also, the weather is guff, so there’s a lot of time indoors to practice your craft, and people like an excuse to drink, so there’s a guaranteed audience out there. It’s a perfect storm of sadness.

Tell me about the Enjoy An Album podcast.

Enjoy An Album is a podcast I host alongside Edinburgh-based comedian Liam Withnail where we listen to the 500 Greatest Albums of All Time in order, and talk for about an hour about each record. It’s a ten year project, and we’ve put a serious dent in the list already, and I love doing it. It’s self-produced with Will McKee a.k.a. Eddie Ting, and we don’t answer to anybody, and it’s class. Every week we do a segment called Secret Posho where we investigate the upbringings of the artist to see whether they’re a Secret Posho or not. Win Butler from Arcade Fire? His dad works for Halliburton, the fracking magnate! James Murphy from LCD Soundsystem? His dad worked for Raytheon, the missile manufacturers! It’s some laugh.

Where is the best place to get pizza in Edinburgh during the Fringe?

Civerinos at Hunter’s Square next to Monkey Barrel would be the perfect place to grab a slice of pizza before you go see a show there. However, if you find yourself in spitting distance of Leith, I highly recommend Razzo Pizza Napoletana. In terms of antipasti, try their arancini ragu – rice, peas, beef, sauce and chives, fried in a powerful crumb. Wow. Tell them Christopher sent you. (They won’t know what you mean by that.) 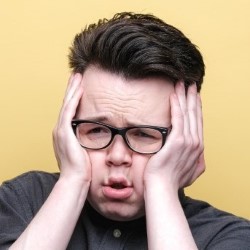