Dan Lees can be seen in various guises on London’s alternative comedy and cabaret circuits. At last year’s Edinburgh Festival he appeared in Victor Brainchild and Mystic Maud Explain Everything and Pekka and Strangebones Comedy Showpeice who also performed at the Glastonbury Festival. Martin Walker wonders what he’s doing this year.

This is my first solo hour show, it is a very idiotic lecture exploring the nature of identity. The theme is explored through eccentric dance, clown, bad puppetry and audience interaction whilst introducing some bizarre and inspirational characters such as an alcoholic cheese obsessed Pope, a jazz prophet and a lonely cowboy with only a goldfish for a friend.

I love pizza, who doesn’t?

I guess the best way to describe it would be as alternative or maybe clown. However I am aware that the word clown has a lot of negative connotations, mainly due to the success of a certain mascot for a certain hamburger chain and Stephen King’s It. Just so there’s no confusion, I don’t wear a red nose and big shoes, but I do act like a complete idiot on stage. Great comedians that have inspired me are Tommy Cooper, Andy Kaufman or Steve Martin.

I first started performing in a musical double act called Moonfish Rhumba, we were just two friends having a laugh on stage essentially, but some people seemed to like it and we managed to make it to the finals of the Hackney Empire and Amused Moose New Act competitions. Since then I’ve been taking comedy more seriously, which may be a bad idea.

It was a big buzz performing in front of more than a thousand people at the Hackney Empire but I’d say my favorite show so far was the first preview of my new show.

Dr Brown and The Boy with Tape on his Face, I wonder how I’ll get a word in edgeways. 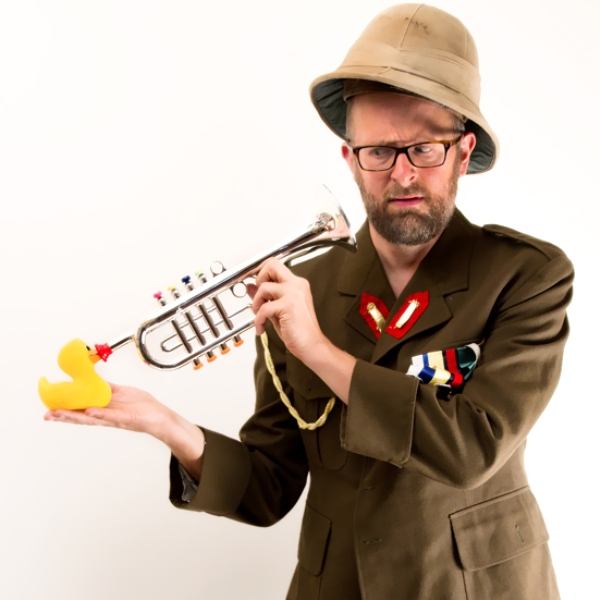