Misery loves company. Which is just as well, as at this year’s Edinburgh Festival Fringe, Rachel Fairburn will be bringing her own brand of dark humour and melancholy to the masses. Martin Walker enjoys his chat with a future star.

Tell me about your 2014 Edinburgh Fringe show.

“It’s called All the Fun of the Fairburn and it’s all about why I am genetically predisposed to be miserable. I talk about a curse that was put on my family and all the bad luck and mishaps we’ve had. My family has a rather morbid history so there’s jokes about death, serial killers and failed relationships, if schadenfreude is your thing, you’ll love my show. It’s not heavy going though, it’s all fun, I have stuff about bouncy castles and old cats too.”

“It’s very uncool, but my Mum actually encouraged me to start doing stand-up. I used to write short stories when I was a kid, mainly about my Dad and his heroic adventures driving a bus. For some reason, my Mum found them hilarious and asked me to write other stuff. She’s a huge comedy fan as well, more so than I am. The big push to stand up though came when I attended a comedy course ran by Ashley Boroda and Seymour Mace. People are snooty about courses but it gave me the confidence to get out on the circuit and gig.”

“The best has to be writing my Fringe show. When I started out in 2007, I never believed I’d ever be able to write and perform an hour long solo show. There’s a real sense of achievement feeling the show develop at previews.

“The worst has to be all the travelling involved with gigging. I deserve a medal for the amount of Megabus journeys I have survived. The 2340 London to Manchester is a killer. It goes to Leeds then my stop, Manchester. Up and back. Why? It also drives past my house on the way to the Manchester stop so I have to look out the window at my house as we zoom past. Torture!” 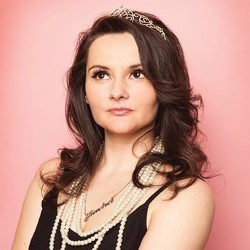