It’s about all the irresponsible choices I’ve made and things I’ve done. I guess I always thought that at some point I would suddenly, magically turn into a sensible adult who always makes the good and correct decisions and choices, and it just hasn’t happened. I wasn’t a sensible child, or a sensible teenager, or a sensible person in my twenties so I’m not sure why I thought this massive change would happen! I look at feeling a little inadequate and guilty about it and, like many millennials, feel like an absolute failure and blame myself for not having achieved enough or done the normal life shit my parents had done by my age. But I also want to reminisce about the joy, fun, and ridiculousness in all of those bad decisions!

You’re a British-Lebanese writer, comedian and classically trained actor. Which comes first, performing comedy or film acting, stage acting or something else?

I almost completely gave all of this up in 2018 and so, without wanting to sound like an absolute bore, all of it. I’d had a couple of very quiet years and I just wasn’t sure my heart was in it. I’ve been incredibly lucky to do such a variety of work in the last 12 months: a bit of theatre, a lot of stand up, some filming, some voiceover, some writing. I have to pinch myself quite regularly – I can’t quite believe it all.

Doing stage acting and performing comedy are things I can’t really do in tandem and so I’ve had to really assess the opportunities that have come in for stage work. If it’s a role I’m not *really* enthused by then I probably don’t want to stop doing stand up for it. I’d love to do more stage acting in the next couple of years – performing with other people is a very different experience to stand up and I do miss that. I like writing as well, I’m working on scripts and things as well, and there’s a different pleasure in envisioning what a script could look and sound like on screen!

As a comedian you’ve gigged across the UK and internationally, in English and in French. Do the same jokes work across the world or do you re-write, acknowledging cultural differences or regional senses of humour?

Yes. I have to work out which references will land. Do people know about Alan Partridge or Top Gear abroad? (No; yes.) A French audience in London is very similar and so I can just translate a lot of my set, though I get VERY nervous in French and I really have to work hard on stage. I gigged in Lebanon for the first time in February, which was mad. As a rule, normally, I’ll open with my broadest material. Office stuff, relatable, observational bits. But one of the promoters, who’d lived in the UK, told me to do stuff about Lebanon. It’s in the middle of an economic crisis and so stuff about my boring life in London just feels very distant. The second gig I did I felt a bit more confident to do stuff about being Lebanese and things that I thought might be too edgy for a more conservative country. I’d love to go back and do some more.

In any country where it’s not your native accent or native language I think you always need to address that. In the US the fact that you’re British will always be a talking point, in anywhere southern European it’s a bit of a shock that I’m *not* from Portugal/Spain/Italy, in Lebanon it’s that I don’t speak Arabic well enough to be on stage in it and that my accent is English English not American. Acknowledging and addressing at the top is always the best way of putting the audience at ease straight away.

I enjoyed your previous, critically acclaimed, Edinburgh show Ellipsis. It was very funny and moving and at times deeply personal. How easy do you find discussing personal stories on stage?

I have to be very careful about how much of myself I give and really look after myself when writing and performing. Doing Ellipsis really takes its toll me emotionally but I know I wanted to write something vulnerable and open. It was important that for that story I was able to give as widely and generously as possible, and even then there are details I omitted because I wanted to be careful that it didn’t drop the audience too far or too early in the show.

We’re a very closed people, Brits, but I wear my heart on my sleeve. If I’m writing something about something that’s happened recently I have to make sure that I’m not doing it as a form of therapy if been something difficult or traumatic for me, and if i think that’s what I’m falling back on then I’ll bank it for later when my head’s worked through it a bit more. It took 18 months of processing before I had the idea for Ellipsis, and then another 18 months of work so I’ll always use that as a reference. But if it’s fine and I’m comfortable, I hope that it’s a good thing for me to talk about and fun for the audience to watch!

Ellipsis was a theatre show and Irresponsabelle is stand up. Given that it was you, in your voice, talking about your life, why wasn’t Ellipsis billed as comedy?

This was a really difficult choice to make and I deliberated for a long time about it. Firstly, for the purposes of the industry, I didn’t want Ellipsis to be my debut hour. But also, I did a work in progress in May 2019 where I tried to bundle it all up into neat punchlines but it missed so much that the narrative version held: gravity, weight, the contrast between humour and sadness. I’m so pleased I kept all of that. I loved being able to lean into the theatricality of it, and use my training and experience.

Thirdly, I didn’t want an audience to come in and expect *PUNCHLINES* Apparently some people did, but then if they ever griped about it I knew I could challenge it by telling them it was their fault for not reading the programme properly, but thanks so much for spending the money on the ticket anyway.

Interestingly, when it transferred to the Soho it went into their comedy programme. Genre is so sticky and I think we can get quite caught up about it. Ultimately, I wrote a show and I performed that show. People laughed and cried. Death of the author and all that, read from it what you will.

What was really great was learning about narrative and structure while I was writing it – i’ve been able to use all of that while writing Irresponsabelle. It’s not been easier this year, but I definitely feel more comfortable knowing where things are going well or not and piecing it all together. And also just leaning into finding every tiny little joke in every tiny little moment and that being its sole aim! 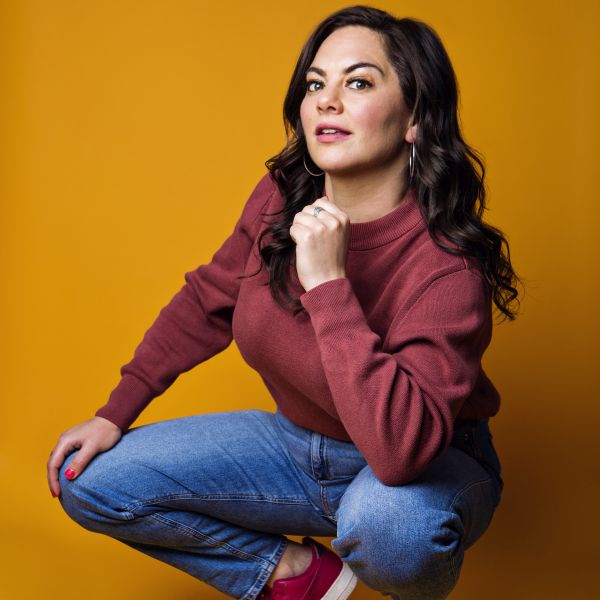