Jake Lambert is a brand new stand up comedian, quickly moving up through the ranks. He only started performing in 2013 but his undoubted talent has already been noticed by both audiences and comedy promoters. Martin Walker grabbed a quick word.

“Ever since I can remember I wanted to be a stand-up comedian, I remember writing sets out, but I never knew the open-mic scene even existed so nothing came of it. About 6 years ago I was writing, directing and acting in short films which I loved, but the process was very long. Then one day I recalled my love of stand-up and realised that it would allow me to write, direct and act all at once, so it was everything I loved to do and the one thing I had always wanted to do– perfect!

“By then I had already gained a following on Twitter as @LittleLostLad through my joke writing and decided to try telling them on stage. It was basically just an audio version of my Twitter timeline, come to think of it, it still is.”

And already he’s been asked to support babyfaced TV comic, Matt Richardson, on the Reading leg of his UK tour.

“Yeah, I’ll be supporting Matt in Reading on May, 1st. The way it came about actually began months before we met. I did a small gig in Leighton Buzzard which had more acts than audience, but luckily one of the audience members was a promoter He invited me to do an open spot in Milton Keynes, then another promoter from Milton Keynes offered me an open spot off the back of that gig which Matt was headlining. After I had been on we got chatting and he asked if I’d like to come and support him, which I think I said ‘yes’ to a lot faster than I care to admit.

I could have just put ‘We gigged together and he asked me’ but I like that story and how one little gig can lead to so much.”

Next up – it’s the melting pot of the Edinburgh Fringe

“I’m going to be doing a show with Dominic Lister who is a brilliant comedian that I met on the circuit. We both happened to be looking for someone to do a show with, so it worked out very well. Our styles are very different but they complement each other well; Dom’s style is quite high energy with lots of stories, and mine is a combination of wordplay, short stories and strange thoughts. The show has something for everyone I’d like to think.

“I’m also doing a compilation show for The Comedy Cow, which is a late night show with some great acts including Olaf Falafel. “

If Jake were curating a stand up show for television, who would be his guests?

“I’m going to do this as though a TV producer has actually asked me in the vain hope that one of them reads this and thinks ‘That would be absolutely brilliant, get me Jake Lambert on the phone’ and asks me to put it together. Therefore my guests would be a selection of the comedians who have inspired me and continue to do so, and would include in no particular order: Sean Lock, Jon Richardson, James Acaster and Lou Sanders. – I really want this to happen.” 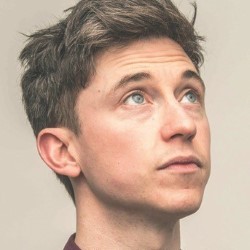