It’s about a worm that has misunderstood who she is and what her limits are. She has heard all about how caterpillars turn into butterflies and thinks, ‘Yeah, I’d like to do that too’

The first gig that I did on my own was to about 6 people in Leicester, I was dressed as an egg.

I got someone to chase me with a spoon and then left.

The best review I’ve had was probably from Harry Hill. He said, “I’m jealous of the telephone bit”.

The worst was when a man got up during the show, walked towards me and said, “I feel sick I need to leave”.

Um yes, probably. I’m not desperate to see them, I try and stay calm about that stuff. As long as people are coming and not throwing stuff at me, it’s ok.

Well, if you get a great review it absolutely helps to sell a show. I like it when they wear a lanyard as a sign to not pick on them but it makes you want to get them on stage in a way. It’s like a ‘do not press’ button

Ah, I didn’t know anything about this. I think you should only teach dogs good things as a rule.

I’m sure there are. I tend to stay away from tricky topics and just shove on a grape costume and a moustache

Yes absolutely both on stage and off. I remember thinking my story about a dead pig would go down well once at a dinner party but it didn’t. Not at all. I forget that growing up on a farm will give you some quite unrelatable experiences

Probably when I did my show, ‘Maid of Cabbage’ at Soho Theatre. The whole run sold out and all my friends and family came to watch. I remembered all the bits and my cousins didn’t hate it. 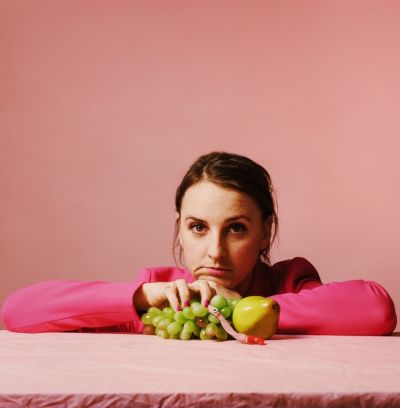