Sam & Tom just want to perform Unrectifiable, but a silly game goes awry when spirits from a wormhole invade their bodies and ruin the fun! OMG!

Hi Sam & Tom. Tell me about your show, Unrectifiable

The Two Ronnies, Ant & Dec, Cannon & Ball: There is a grand lineage of double acts in which no one cares who is who. Sam & Tom are sick of being mistaken for each other backstage at gigs (especially by debtors). Their solution? A show that is so confusingly ambitious in its portrayal of transcendental metaphysics and existential monism that afterwards there can be no doubt at all. They are Sam & Tom, Tom & Sam; they are eternal. There will also be 5-6 sketches of 3-4 minutes length.

It’s like constantly being pecked on the head by a giant gnat. How did the gnat get so big? Who is feeding this gnat? Why has it got so many lanyards? These questions will never be answered, but you will wander the Royal Mile aimlessly wondering why no one else seems to care you have a giant gnat on your head. “Look at my gnat”, you say. “How much will you give me for my gnat?” you bemoan.

Christopher Lee was destined to be a great opera singer, but didn’t have the money so became Dracula instead. But at the age of 88 he released his debut metal concept album. He won the Spirit of Metal Award. He achieved so much in his life, and at the end of it he was releasing metal covers of My Way and Little Drummer Boy with all the conviction of an maestro. He did it ‘His Way’, which was whichever way he damn well wanted.

Tom once killed a man at a gig. It was the strangest thing. There we were, peddling our skits and bits, and this man on the front row calls out “Good job, boys!” I think he meant it sincerely, but Tom immediately pulled out his hunting knife and leapt on the guy. It was over in about five seconds but the sour atmosphere lasted the rest of the night and ruined what until that point had been a perfectly serviceable fundraiser.

Broadway Baby covers them all. We need either a two-star or a five-star off you this year and then we’ve nearly got the set, and then we can live our dream of putting them all on a poster together. How we’ll laugh, mucking about in Photoshop with the layers.

I don’t think we’re performers. Maybe we’re writer-performers? So I suppose we’d be writers, which would’ve been a smarter career choice. We could be aloof and neurotic and I could have a cool personality quirk like I always have a perfectly polished apple in my black fedora, and people would say “Oh, ignore them, they’re just writers”, and grannies would tut and spit.

Clown Ministry. My mum (Sam[‘s mums]) got it for my (Sam, this is Sam talking here) birthday (my birthday, an adult’s birthday). The full title is ‘Everything New and Who’s Who in Clown Ministry’ and it’s a fascinating insight into the world of bible-belt religious clowning with accompanying scripts for skits. Think Tom’s probably still reading the Noggin the Nog books I bought him for his birthday (virtue signalling).

It would be called Super Duper Come On Everyone Let’s Just Have a Little Bit of Fun Then Shall We [Just a Smidgeon of Fun and Then We Have Work to Get on With] and everyonewould be in it. Everyone. The Queen would be involved. Charles Manson would get parole.Big Bird would have to come down. You’d have a cameo. It’d be the best show on thenetwork, mainly because the shooting schedule would be so ambitious as to precludeanybody doing anything else. Eventually it would develop into its own self-regulating society,with roles being passed down to our increasingly narcissistic, entitled children who can onlyengage with their characters ironically as they only know how to pursue status and notartistic validity, but no one will cancel it. Imagine that! 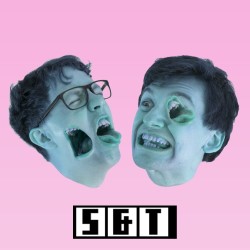